pH sensor for use in the body 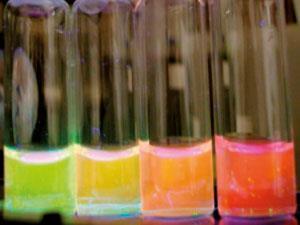 US scientists have developed a pH sensor based on nanocrystal quantum dots designed to be used in a biological pH range. pH is an important factor in monitoring tumour health and the efficacy of anticancer treatments, and the sensor could be injected into tumours to monitor their health in real time.

Nanocrystal-based pH sensors have been reported before as they have attractive properties, but the sensors operate in alkali conditions, making them unsuitable for biological applications. To overcome this problem, Daniel Nocera from the Massachusetts Institute of Technology, Cambridge, and colleagues, tailored their sensor so that it could operate at pHs between 6 and 8 (physiological pH).

The sensor consists of a semiconducting nanocrystal surrounded by a dendritic polymer containing a pH sensitive fluorescent dye. The polymer helps to make the system water soluble and acts as an anchor for the dye, the dye changes colour in response to pH and the nanocrystal is fluorescent. Nocera says that he and the team ‘finely tuned the energetics between the nanocrystal and the pH sensitive dye such that the sensor is self-referencing’. This means that the ratio of the signal from the dye to the signal from the nanocrystal changes in response to pH, but is independent of concentration or signal intensity, meaning that no external point of reference or zero is required.

The sensor can work with linear or two photon excitation from an infrared source. Two photon emission is desirable, since it results in less scattering and has a greater penetration depth, making it ideal for in vivo applications.

Yue Bing, an expert in biomedical devices and chemical and optical sensors at the University of California, Los Angeles, US, was excited about the sensor. ‘The sensor is effective in a physiologically relevant pH range,’ he said, adding that ‘it would allow high sensitivity and high resolution biological sensing and imaging’.

Nocera and his co-workers are testing the sensor in vivo.