Photography has provided the inspiration for a fast, room temperature route to produce flexible electronic components

Revealed at the Euromat 2009 conference in Glasgow, the technique uses the inkjet printing technology being widely researched as a low cost route to flexible electronic devices. As well as further driving down costs, the new method can be used to make printed electrodes out of useful thermoplastic plastics such as PET (polyethylene terephthalate) and polycarbonate. This is something that has been problematic in the past as these plastics decompose at temperatures traditionally used after printing to cure the ink.

Patrick Smith, from the University of Freiburg in Germany, who presented the work, explained that low temperature curing routes do already exist but typically take place at 200?C and take up to an hour. ’If we can reduce the temperature, and the processing time, we can reduce costs,’ says Smith. The room temperature method takes 30 seconds from printing to being ready to use as an electrical component, he adds. 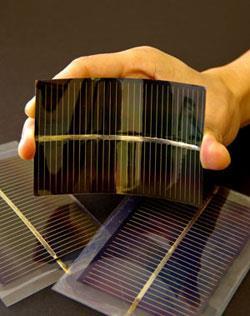 To make the components, Smith prints a metallo-organic decomposition ink, silver neodecanoate, onto plastic using a commercially available printer. The clever bit is how the silver ions in the ink droplets are converted (or cured) into conducting silver atoms. The first stage is to apply a UV light to the printed lines, where photons from the light generate enough silver atoms from the silver ions to produce a latent image, explains Smith. ’It’s the same process as photography,’ he adds. And in a second stage that parallels developing photographic film, a chemical developer - in this case hydroquinone - is used to generate lots of silver atoms in the latent image.

’Inkjet printing will be judged not on its ability to dispense ink, but on the quality of the final product,’ says Smith. And with that in mind he has studied the quality of his silver tracks using scanning electron microscopy (SEM), and tested their conductivity. He found they were ’of comparable quality’ to traditional techniques. Smith also tested the components’ flexibility: ’We saw no significant changes in resistance after lots of bending,’ he adds proudly.

Now, the hunt is on to find a use for the components. ’We have not focused that much on applications so far, because the technology had to work first,’ Smith told Chemistry World. ’We will now be looking into applications like flexible electronic [devices], such as laptop screens, and flexible solar panels.’

Brian Derby, an expert in inkjet printing functional components at the University of Manchester, UK, says that the approach is ’particularly innovative, and may be a significant advance in printing flexible electronics’.

He adds a note of caution, however, saying: ’We need to see whether the adhesion of these room temperature processed structures is sufficient for practical use’.