Scientists in Switzerland have designed self-sorted multicomponent surface architectures for supramolecular organic photosystems that are 40 times more active at generating electrical current from light energy than their single-component counterparts. In the future, this concept could be used to design more efficient organic solar cells.

Building multi-component supramolecular organic systems that generate electricity is of interest because they have the potential to be cheap photovoltaic devices. However, building these systems on surfaces with high precision and control can be time consuming and expensive.

Now, Stefan Matile and colleagues at the University of Geneva believe they have a cheap and easy alternative. Using self-organising surface-initiated polymerisation (SOSIP),1 the team has developed 3D supramolecular structures mounted on oxide surfaces that make photosystems that are more efficient than those of other organic structures.2 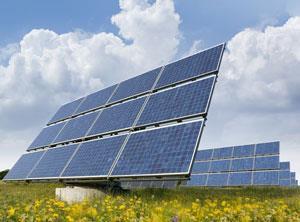 Matile explains that in order to efficiently convert light into energy (in this case electrical) photosystems need two channels of molecules adjacent to each other within the structure. One channel carries electrons in one direction and the other is used to carry the positive charge or ’hole transport’ - holes created by the electrons in first channel - in the opposite direction.

Using SOSIP, Matile and his team have been able to incorporate this double channel concept into their supramolecular architectures. ’This is known as the supramolecular heterojunction, which is an important architecture for future organic solar cells,’ says Matile. He goes on to explain that, using the approach, different component parts can be built into the structure in a uniform and alternate manner by remote control. Matile says that the process can be thought of as ’3D Tetris’ on the molecular level.

Tomas Torres, an expert in supramolecular structures at the Autonomous University of Madrid, in Spain, says: ’This method will provide new ideas for researchers and in this sense it is very significant in the field of supramolecular chemistry.’ However, he adds that, ’it will not have a significant impact on the race for molecular photovoltaics’.

Frank W?rthner, an expert in organic materials at the University of W?rzburg, Germany, is more optimistic about direct application. ’Obviously, dye-sensitised solar cells on titanium dioxide will be the next step,’ he says. ’If successful, this approach may advance the field of Gratzel-type solar cells to unprecedented efficiencies and thus to the market,’ he adds.