US researchers have come up with an explanation for their recent results that show that introducing piezoelectric semiconductor nanowires into solar cells improves their efficiency.

Piezoelectricity is the charge created when certain materials are placed under stress, where compressing or stretching the substance generates electricity. Piezoelectric materials have been used as sensors in cars, as energy scavengers and also as ignition sources in electric lighters. Researchers across the world are working on improving the efficiency of photovoltaic devices, but until recently hadn’t thought of harnessing piezo-potential to do so. 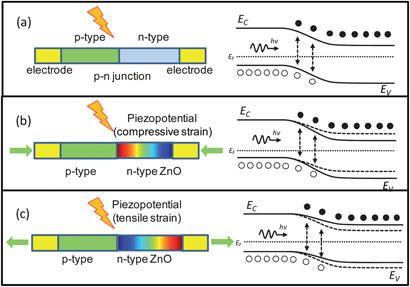 Schematic and energy band diagram of (a) a general nanowire piezoelectric solar cell fabricated using a p-n junction structure. Schematics and energy band diagram of the piezoelectric solar cells under (b) compressive strain and (c) tensile strain, where the polarity and magnitude of the piezopotential can effectively control the carrier generation, separation and transport characteristics. The colour code represents the distribution of the piezopotential at the n-type semiconductor

In a previous investigation, Zhong Lin Wang and his team at the Georgia Institute of Technology, Atlanta, found that putting a piezoelectric semiconductor into a solar cell improved its efficiency but they could not explain why. Now, Wang has found an explanation by showing how a simplified ZnO piezoelectric p-n junction solar cell works. Solar cells of the p-n junction or metal-semiconductor type use the energy from inbound photons to separate electron-hole pairs that then allow the conduction of electric charge. The team discovered that piezoelectric materials change the electronic band structure inside the device, and this affects the carrier generation, separation and transport at the junction. This is exciting because the output voltage of the solar cell as a whole can be controlled by changing the piezoelectric potential. Wang explains: ’The inner-crystal piezopotential tunes the carrier separations and transport processes, which we call the piezo-phototronic effect.’

Xudong Wang, an expert in piezoelectric nanodevices from the University of Wisconsin-Madison, US, says that he doesn’t think this effect will be used commercially yet as it is such a new discovery, but says: ’I do think this effect can have significant impact on the improvements of photovoltage devices.’

In the future, the Georgia Tech group hopes to capitalise on this new ’piezophototronic effect’ and further improve the efficiency of their solar cells.