Chinese researchers have developed polymer nanoparticles that can release insulin in response to changes in glucose concentration, creating a potential treatment for diabetes.

Xingju Jin and Chaoxing Li of Nankai University in Tianjin used a copolymer with a mixture of phenyboronic acid and sugar-based side chains to form their nanoparticles, which they then loaded with insulin. The nanoparticles self-assemble by forming cross-links between the pendant boronic acid groups and the free hydroxyl groups of the sugar, with insulin incorporated between the chains. When free glucose is added, it competes to bind with the boronic acid, breaking the cross-links so that the nanoparticle swells, releasing its payload of insulin. 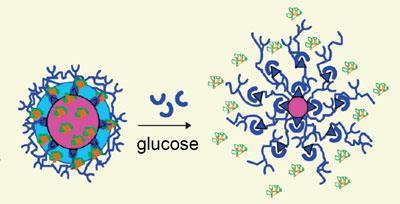 The polymer nanoparticles swell in the presence of glucose, releasing their insulin cargo

Boronic acid materials had previously been shunned for use in medical applications because of their toxicity. By incorporating the sugar groups into their polymers, however, the group overcame two hurdles simultaneously - conjugation of the boronic acids with the sugar moieties masks their toxicity and provides the reversible cross-linking system needed to get the nanoparticles to self-assemble while still being responsive to added glucose.

Jin explains that the nanoparticles can swell and contract reversibly - if the external glucose is removed, the particles revert to almost their original size. ’We hope that the nanoparticles could be able to release multiple doses of insulin from just one administration,’ she explains. ’But the problem is that the loading capacity is not very high - only about 10 per cent.’ A second problem the team faces is that some of the insulin leaches from the particles even in the absence of the glucose trigger. Jin explains that this is caused by insulin absorbed on the surface of the nanoparticles, rather than being trapped inside.

To solve both of these problems, the team are looking at controlling the formation of the polymer. ’In this first study,’ Jin explains, ’we used a random radical copolymerisation, which means that the polymer structure is not very well defined. By using a more controlled polymerisation method, we hope to get a better-defined nanoparticle architecture’. Another possibility is to link the insulin to the boronic acid monomer before polymerisation, which should increase the loading capacity and avoid insulin absorbing on the particle surface, says Jin.

’Overall, I think this is a clever chemical design,’ comments Thai Thayumanavan from the University of Massachusetts in Amherst, US. ’Boronic acid-based systems have largely been used for ex vivo sensing of carbohydrates, but have been considered unsuitable for in vivo delivery due to toxicity. The group has demonstrated here that it is possible to reduce toxicity, at least in vitro. The practical implications of these findings will have to be analysed through in vivo studies, both in terms of responsive characteristics and toxicity.’

Jin agrees that a lot more work is needed to develop an effective insulin delivery system. ’We have done some preliminary experiments in mice, and they show that these nanoparticles can lower blood glucose levels to some extent. The major challenge is to match the glucose sensitivity to the needs of diabetes patients, so we will need to collaborate with diabetes treatment experts.’ She adds that the group is also looking at how the polymers could be degraded by natural enzymes, to ensure that they are safe and won’t accumulate in the body.