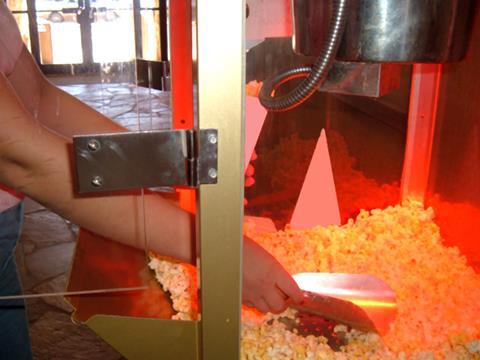 A butter flavouring used in the production of microwave popcorn could be a respiratory hazard to workers and could even alter gene expression in the brain. This is the conclusion of researchers from the US National Institute for Occupational Safety and Health (NIOSH) and West Virginia University, investigating the effects of 2,3-pentanedione on laboratory rats. Ironically, 2,3-pentanedione was introduced to replace the flavouring diacetyl, which was found to have similar health effects over 10 years ago.

The researchers exposed groups of rats to different concentrations of 2,3-pentanedione, diacetyl or filtered air over a six hour period. They then examined the brains, lungs and nasal tissues from these rats at different periods after exposure. In addition, the team evaluated changes in gene expression in discrete brain regions. Rats that inhaled 2,3-pentanedione suffered severe damage to the lining of the airway that was comparable with damage caused by diacetyl. There was also evidence that exposure resulted in changes in the brain, though the full extent of this is not yet known.

‘Our study demonstrates that pentanedione, like diacetyl, damages airway epithelium in laboratory studies. This finding is important because the damage is believed to be the underlying cause of bronchiolitis obliterans,’ says Ann Hubbs, who led the research. Bronchiolitis obliterans is a rare but life-threatening form of lung disease, in which inflammation or scarring obstructs the small bronchioles within the airway. The disease is irreversible and severe cases often require a lung transplant.

Bronchiolitis obliterans hit the headlines in 2000, when eight former employees of a Missouri popcorn factory were diagnosed with the disease, which became known as ‘popcorn workers’ lung’. This prompted a series of lawsuits resulting in multi-million dollar payouts for affected workers across the US. As a result, the industry instigated respiratory protection for workers involved in microwave popcorn production and moved to replace diacetyl with other flavourings, including pentanedione, a dicarbonyl compound that is a close structural relative of diacetyl.

The team’s findings have significant implications for public health and workplace protection. ‘This study provides data supporting the importance of controlling workplace exposures to 2,3-pentanedione,’ Hubbs tells Chemistry World. ‘Our study also supports established recommendations that flavourings should be substituted only when there is evidence that the substitute is less toxic than the agent it replaces.’ Hubbs and her colleagues are currently sharing their findings with NIOSH stakeholders and partners.

Celeste Monforton from George Washington University’s School of Public Health & Health Services, who specialises in worker protection, says that the team’s work on pentanedione is significant because it reinforces previous toxicological evidence that exposure to other food flavouring agents has significant adverse biological effects. But she wants to see more done to protect workers and consumers.

‘This latest research suggests this and chemically-similar compounds may be just as harmful as diacetyl if inhaled in high concentrations by workers and the public,’ she says. ‘It's long past time for the US Food and Drug Administration and other regulatory bodies to revise its use of the “generally recognised as safe” designation to take into account compounds that may not be harmful to ingest, but are extremely harmful when inhaled.’

With other dicarbonyl compounds, such as hexanedione and heptanedione, also used to add a butter flavour to food products, Hubbs and her co-workers are now seeking to build on their existing research by conducting studies designed to predict which flavourings will be hazardous when inhaled, based upon the chemical structure and properties of the flavouring. They are also studying short-term testing strategies to enable rapid identification of workplace vapors that can damage the airways of those involved in manufacturing processes.