More evidence to blame atrazine for decades of amphibian decline

Atrazine, one of the world’s most widely-used herbicides, makes frogs more susceptible to disease by compromising their immune system, US scientists suggest. The study provides further evidence linking the herbicide to a global decline in amphibian populations over the last three decades.

’Amphibians are perhaps the most threatened vertebrates on the globe,’ says Jason Rohr, who led the work at the University of South Florida. Since the 1980s, he explains, amphibian populations have been declining at a startling rate.

Local chemical pollution has been blamed along with global climate change. But links between pollution and amphibian diseases are not clear, says Rohr.

Rohr and colleagues studied parasitic infection of the leopard frog (Rana pipiens) - a declining species - in wetlands across Minnesota. Of 240 possible factors, the researchers found that atrazine and phosphate, a common component of fertiliser, were the best predictors of the abundance of parasitic flatworm infection in the frogs - which can lead to malformed limbs, kidney damage, and death. 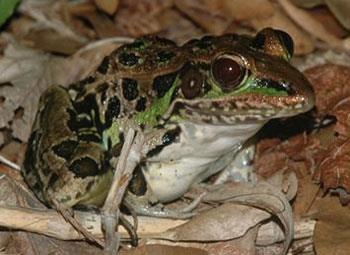 The leopard frog, a species in decline

Back in the laboratory, the team found that frogs of various species exposed to atrazine were more likely to have a suppressed immune system, judging by measurements of immune cells. Atrazine also appeared to increase concentrations of the snails that harbour flatworm parasites.

Atrazine has already been suspected of causing a variety of ill-effects in frogs, such as growth defects and reduced sex hormone production. The chemical was banned on fears of groundwater contamination by the European Union in 2004. But it is still commonly used in the US; in 2006, the country’s Environmental Protection Agency concluded there was not enough evidence to suggest the chemical was harmful to humans.

’I doubt that further documentation of atrazine’s harmful effects on frogs will prompt a ban in the US anytime soon,’ says Pieter Johnson, an expert on amphibians at the University of Colorado at Boulder, US.

’In some respects amphibian development mirrors human development very closely and could therefore be used as a bioindicator. But in other regards, amphibians and humans are very different both ecologically and physiologically,’ Johnson adds. ’Work such as this, in combination with more findings that atrazine could pose a threat to humans may push towards a ban in the US.’

A falling population of amphibians is itself a cause for concern, let alone any effect on humans, notes Rohr. Though bullfrogs and cane toads have been castigated for being invasive predators, most native amphibians are important for controlling insect pests that attack crops, and, as prey for birds and mammals, provide a link between freshwater and terrestrial ecosystems.