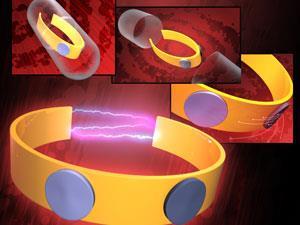 Scientists in the US have designed an ingestible electronic device that is composed entirely of edible materials and produces its own electric current.

Since 2008, Christopher Bettinger and colleagues from Carnegie Mellon University in Pittsburgh, Pennsylvania, have been working on biodegradable electronics for medical devices. The team’s overarching goal is to develop electronically active medical devices that can be implanted, are functional and break down in the body. ‘Two issues that seem to keep coming up along the way are how will these devices be powered and how can we integrate devices with the body in a non-invasive manner?’ says Bettinger. ‘The idea of edible current sources is to serve as power supplies for medical devices that can be taken orally – so they're non-invasive – using materials that are ingested in common diets.’

Here the team designed and fabricated an ingestible current source consisting of flexible polymer electrodes and a sodium ion electrochemical cell. Having flexible polymer electrodes means they can be folded into an edible capsule while the sodium ion cell serves as an on-board energy supply. ‘The idea is for the patient to consume a pill that encapsulates the device,’ explains Bettinger. ‘The pill will have a form that is similar to a vitamin. The device will then undergo programmed deployment in the gastrointestinal (GI) tract or the small intestine – depending upon the packaging – after which the battery will then activate.’ 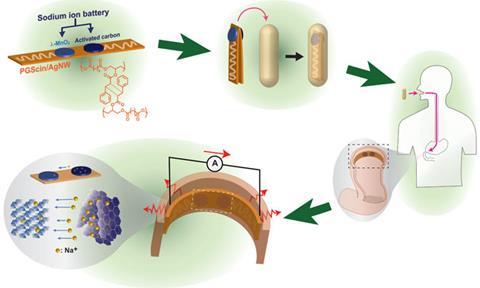 Bettinger says that ‘the battery could power biosensors to measure biomarkers or monitor gastric function. Alternatively, the device could deliver current to stimulate tissues for use in therapies. After the battery is exhausted, the device will simply pass through the rest of the GI tract.’

Robert Langer, an expert in biotechnology and biodegradable delivery systems, based at Massachusetts Institute of Technology, Cambridge, US, thinks this is pioneering work. ‘This could lead to a host of novel uses in drug delivery and tissue simulation,’ he says.

As with any medical device, there are always regulatory hurdles that must be overcome and Bettinger’s focus on edible devices may help expedite regulatory approval. ‘This is because edible devices do not need to be sterilised. Also, the eventual excretion of these devices in the faeces provides a little more latitude in terms of materials that we can use compared to traditional implants,’ explains Bettinger.