Dutch researchers have developed a way to ’print’ stable cell-containing scaffolds, creating a method that could one day be used to help make tailor-made tissue grafts and even grow whole synthetic organs.

Jacqueline Alblas and her group from the University Medical Centre in Utrecht, The Netherlands, have made polymer hydrogel ’ink’ materials that are fluid enough to be used in a printing device, but can later be converted into stable structures that don’t fall apart when handled. They can incorporate stem cells into the hydrogels to begin the process of tissue generation within the scaffolds.

The cell-laden hydrogel is printed as a long strand, which can be built up into multi-layered structures, explains Alblas. ’We made a layer of strands, then a cross-hatched layer on top of that to build upwards, but you can also print circles to make tubes.’ By combining different structures impregnated with different types of cells, it should be possible to build much more complex structures such as tissue grafts that have blood vessels built into them, she adds. 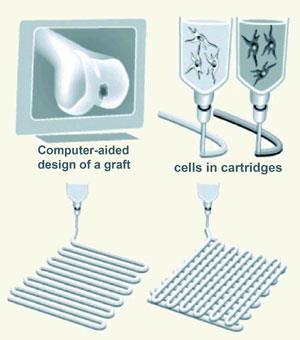 Two problems in printing tissues and organs are the formation of defined, versatile shapes and keeping the cells alive throughout the process and beyond. Hydrogel polymers are particularly suitable in this last respect as they provide the highly hydrated environment required by cells and allow nutrients and oxygen to diffuse within the structures.

However, Alblas explains, while many hydrogels can hold their shape after printing, they are often very soft and easily squashed when handled, which can ruin detailed structures. To tackle this problem, the team modified an existing hydrogel to make it photopolymerisable. Shining UV light on the printed structures activates a crosslinking reaction that fixes the shape of the gel - ’photopolymerisation means that you can handle the structure, it’s not a snotty substance anymore, you can just pick it up!’ says Alblas.

The team are initially concentrating on structures for bone grafts, so they incorporated cells from goat bone marrow into their hydrogel. It is important that the cells can survive and grow within the structure, and they found that the cells survived much better in the new photopolymerisable gel than in non-crosslinked versions, lasting for up to three weeks rather than a few days. ’The modification of the gel makes it much more suitable for loading with cells,’ says Alblas. ’We think this might be because the crosslinking prevents any leftover monomers from disrupting the plasma membranes of the cells.’

Glenn Prestwich from the University of Utah in Salt Lake City, US, who is also researching hydrogel materials for organ printing, thinks that this is a clever combination of approaches: ’It addresses the key physicochemical problems of being soft for printing but robust for handling, making it a potentially useful research tool.’

However, Prestwich sees some problems with the group’s choice of materials: ’The major challenges in organ printing are in the maturation, implantation, and integration stages,’ he explains, ’and these synthetic polymers are only slowly biodegradable, so don’t really address the critical design criteria for a clinically useful material.’ Alblas agrees that these polymers might not be ideal for clinical applications, saying ’they’re not very natural gels, and we don’t have a lot of data on the in vivo characteristics, but our main focus was on the printing properties.’