Chemists are joining the search for better gene therapies. A simple ruthenium complex, when attached to a synthetic oligonucleotide, can help identify the secondary structures of the nucleic acids in that oligonucleotide. 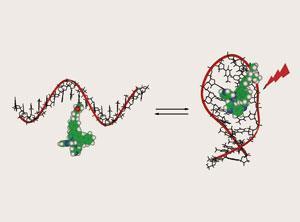 Andr?e Kirsch-De Mesmaeker at Universit? Libre de Bruxelles, Belgium, and colleagues in Spain and France, chemically attached a Ru(II) complex to different 17-mer oligodeoxyribonucleotides (ODNs), either in the middle or at the end. Single stranded ODNs can contain self-complementary regions, which bind together forming secondary structures.

Kirsch-De Mesmaeker’s group compared the luminescence emission lifetimes in structures that could undergo this so-called self-structuration with those that didn’t have the self-complementary capability.

The Ru(II) complex’s luminescence was sufficiently sensitive to its microenvironment that it could be used to probe self-structuration. This probe is more sensitive than other methods used to predict secondary structures, and can even detect pi-stacking of bases in ODNs.

Detecting secondary structures, such as hairpins and random-coils in oligonucleotides is vital for treating genetic diseases. In some gene therapies the synthetic oligonucleotide drug’s sequence is clearly defined so it can target the disease gene. Any secondary structures formed can therefore dramatically influence the targeted gene’s ability to recognise specific nucleic acid sequences.

Kirsch-De Mesmaeker would like to see this new research exploited for developing gene therapies and believes that the future lies in ’detecting different secondary structures of polynucleotides adopted in vivo’.