A world first in the art of protein origami has been attained with a novel method of folding a polypeptide chain into a three-dimensional tetrahedron. This result could open doors to the formation of more complex polypeptide structures and entirely new, unnatural proteins with new opportunities for drug delivery and catalysis. 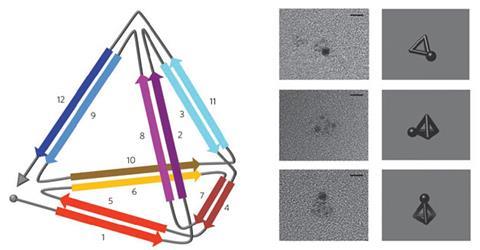 Proteins are nature’s workhorses and are the optimised product of millions of years of evolution. They are made of polypeptide chains folded into unique three-dimensional structures and their shape defines their function.  In nature, this shape is already encoded in the building blocks that make up the polypeptide chain, but understanding the interactions that lead to complex three-dimensional structures has made it difficult to design and create new proteins.

Now, a team of scientists from Slovenia, led by Roman Jerala, has created a three-dimensional tetrahedron by folding a polypeptide sequence consisting of building blocks of coiled–coil helices joined together. The key driving force behind the method relies on the ability of the helices to bind tightly to each other to form coiled–coil dimers. Importantly, the helices can be designed to bind only to their specific partners. ‘The success of the approach is based on the availability of orthogonal pairs [coiled–coil dimers] that interact selectively, but the real novelty is the concatenation of the interacting segments into a single chain,’ explained Jerala.

As one of the simplest geometric objects, the team based their final design on a tetrahedron whose six edges could be constructed from six coiled–coil pairs. They successfully linked 12 coiled–coil dimer-forming segments that were hinged by a flexible polypeptide to enable the helices to fold and bind to their specific partners. Moreover, they found that self-assembly into the tetrahedra depended on the order of coiled–coil forming segments within the polypeptide, just as folding of the natural proteins relies on the precise amino acid sequence.

While DNA origami established long ago that this type of self-assembly was possible, until now proteins lacked the predictable intermolecular interactions that enabled a straightforward way of relating sequence to structure. ‘This work represents a clear step towards the modular assembly of de novo protein structures and suprastructures,’ say Derek Woolfson, a biochemist at the University of Bristol, UK. ‘Jerala and colleagues have managed to encode all of the information in a single polypeptide chain.'

Unlike DNA, however, the protein’s building blocks are incredibly diverse, meaning that there are a huge number of potential new structures with exciting possibilities. ‘This is a major breakthrough in programmed protein self-assembly,’ says Hao Yan, Arizona State University, US. ‘If this can be further developed to make any designer 3D architectures folded by rationally chosen peptide sequence it will definitely open up lots of opportunities in protein engineering, biomimicry and programmable self-assembly.’

Chengde Mao of Purdue University, US, agrees that the current approach could produce a whole host of other nanostructures, but also throws up a number of new and interesting questions. ‘One key challenge in the future for this strategy is how many orthogonal coiled–coil interactions can be devised? The number of available orthogonal interactions is proportional to the complexity of the final peptide nanostructures.’

Jerala admits that they have some way to go before they can begin replicating what nature has already managed. ‘It would be fantastic if we could know how to build protein structures in any selected shape that are completely different from the existing ones,’ he say. ‘But we can’t (yet!), so our modular approach provides the way to build a limited, but nevertheless new, set of protein folds.’