A team of European scientists have revealed the molecular mechanism that allows plants to protect themselves from strong sunlight. The findings could be important for the development of solar energy systems, as well as helping agriculture.

Plants capture energy from the sun using an antenna containing proteins and chlorophyll pigments. It is adapted to absorb light and convert it into chemical energy through a variety of excited states. ’This system is very effective at absorbing light, but when the light is bright it gets to a point where too much energy is absorbed’ explains Peter Horton of the University of Sheffield, UK, a member of the international team that collaborated on the research. 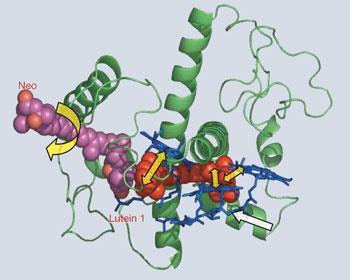 Model of an LHCII monomer21 showing the key pigments involved in the establishment of qE. Lutein 1 (red) is closely associated with chlorin rings of chlorophyll (blue). Curved broad yellow arrow, the twist of the neoxanthin (Neo) molecule (pink); white broad arrow, the possible movement of lutein 1 towards the chlorophyll cluster (broad yellow arrows)

If there is nowhere for the excess energy to go it can form damaging reactive oxygen species. But plants have evolved a way of dissipating the energy in a harmless way. ’We have nailed this mechanism down’ said Horton.

The mechanism relies on a protein called LHCII in the light-harvesting assembly. LHCII is normally set up to absorb as much light energy as possible. But in strong light the protein switches to a protective state by changing shape, moving a carotenoid molecule called lutein close to two important chlorophylls.

When the chlorophylls are excited by absorption of light the energy is then instantly transferred to a lutein excited state. ’When the lutein becomes excited it immediately decays to the ground state with release of heat,’ Horton told Chemistry World. The excess energy never has a chance to do any damage as the heat dissipates harmlessly. The protective state still allows safe levels of energy to be used for photosynthesis. ’It’s more like a dimmer switch than an on-off switch’ explained Horton.

The team had already observed LHCII’s conformational switch in purified samples using resonance Raman spectroscopy. They were able to identify a ’fingerprint’ of each state. Now they have used the same technique to observe the tell-tale spectral signals in whole leaves.

Knowing the mechanism could allow for modification of crops to be more resistant in very sunny climates, Horton said. But the insight could also help researchers attempting to generate electricity or to make hydrogen by imitating photosynthesis. ’Any device that is carrying out solar energy conversion is susceptible to light damage’ said Horton.

Commenting on the work, Gary Brudvig of Yale University, US, who studies the molecular basis of photosynthesis, said, ’Learning how nature compensates for major changes in light, and applying it in artificial systems might be a way to improve artificial photosynthesis. An internally protective mechanism would really be a dramatic advance, but we are still at the very early days.’