Cells chaperone metalloproteins to prevent them partnering with the wrong metals

UK researchers have discovered that proteins which use metal cofactors can be surprisingly promiscuous metal binders, happily taking up the ’wrong’ metal. The work could throw new light on the role of metal ions in neurological disorders such as Alzheimer’s disease.

At least a quarter of all proteins rely on metal ions to carry out their duties around the cell - for example to form the catalytic centre in enzyme active sites. Proteins were thought to be able to select the right metal cofactor of their own accord, due entirely to properties innate to the protein - but a new study shows that proteins can be surprisingly unselective when it comes to choosing their metal partner.

In fact, given the choice, certain bacterial proteins will bind more readily to the ’wrong’ metals than to the right ones. The only reason they don’t usually do this, says Nigel Robinson, who led the study at Newcastle University, is because they assemble in different regions of the cell. ’There has been a tendency to think that proteins will just pluck the right element from solution,’ says Robinson. ’This work shows that this is not the case.’ 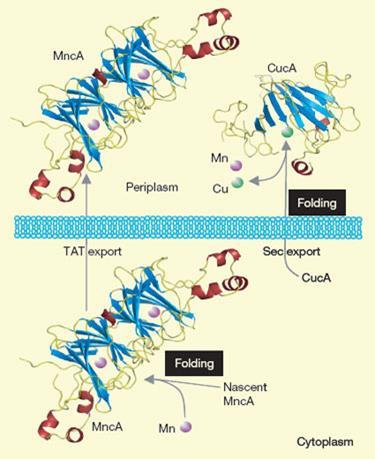 As proof of principle, the team studied two proteins in the cyanobacterium Synechocystis PCC 6803 - one known to bind copper, the other to manganese. Having established a close structural similarity between the metal binding sites of the two proteins, they decided to find out whether Cu2+, which is known to have a very high binding affinity, could out-compete Mn2+ for its own binding site. Sure enough, in a solution containing equal concentrations of Cu2+ and Mn2+, the manganese-binding protein bound exclusively to copper.

But in bacteria, folding of the manganese binding protein around manganese occurs in the cytoplasm at the heart of the cell, before it even meets copper. By contrast, the copper binding protein folds at the very outer reaches of the cell - where copper is more abundant - and it follows a different path. Robinson says separate cell trafficking routes and compartmentalisation may have evolved to shield the weak-binding manganese cofactors from competition. He expects these mechanisms to be mirrored in more complex organisms.

’It’s a beautiful example of how biology can overcome chemistry,’ says Cl?udio Gomes, a protein folding expert at the New University of Lisbon in Portugal. He thinks researchers will be forced to consider how malfunctioning of these mechanisms could play key roles in diseases linked to metalloproteins, including various neurodegenerative disorders.

Robinson says Alzheimer’s, which has already been linked to copper binding proteins, may be caused by copper ions straying off the beaten track. ’You can imagine that maybe with the passage of time, copper could accumulate on the wrong proteins, causing them to misfold,’ he says.