Scientists have made a carbon nanotube pencil that can draw gas sensors straight on to paper. This cheap and extremely quick prototyping method could spur huge advances in gas sensors, both for public health and in something as simple as toilet ventilation. The stability of the solid pencil composite also means it could be suitable for 3D printing, making gas sensors on demand and to the customer's specification.

Volatile organic compounds (VOCs) are a huge health concern in public spaces and in the workplace: some VOCs contribute to photochemical smog and factory operators must be extremely careful that employees are not exposed to health-damaging vapours. For this reason gas sensors are increasingly in demand to monitor such molecules. According to lead author Tim Swager at the Massachusetts Institute of Technology, US, the gas sensor market is already worth $3 billion (£1.9 billion) a year and he expects that figure to grow significantly over the next few years. 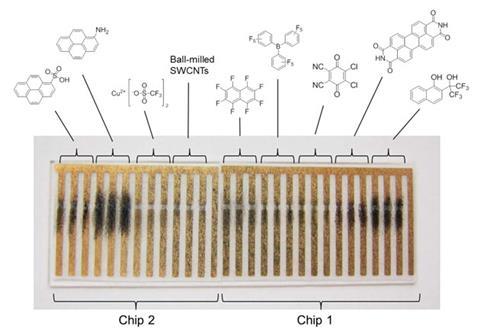 Swager’s gas sensors are based on the concept of a chemiresistor – a resistor that registers a change in conductivity as it interacts with a chemical. To create the chemiresistor PENCIL (process enhanced nanocarbon for integrated logic) the team mixed nanostructured carbon – graphite or carbon nanotubes – with a selector molecule, in this case naphthalene with a hexafluoroisopropyl moiety, which reacts selectively with different chemical vapours. They then ball milled the two solids together and compressed the PENCIL mixture into either a pellet or into the shape of a conventional pencil’s lead. Finally, the team drew the gas sensor onto cellulose paper that had gold electrodes at either end. The sensor was able to detect and distinguish between acetone, tetrahydrofuran and dimethyl-methylphosphonat vapour by changes in resistance when they interacted with the selector molecule. And because the production process is so simple a gas sensor with new selector molecules can be created in just 15 minutes.

According to Swager, the speed and ease of this method allows gas sensor prototypes to be tested very quickly, meaning scientists can look at combinations they never had the time to before. ‘We are reporting a discovery tool as much as a fabrication tool and because it’s such a rapid method we can start working with three compound mixtures.’

Such advanced sensors could have a huge impact. They could be used to test whether food has gone off – fish release amines when they go bad, for example. Another example of their potential importance is dynamic ventilation – these low-power, wireless sensors could be placed around a building and linked to the ventilation system. Air conditioning could then be turned on, for example, when carbon dioxide levels started rising in a lecture theatre, rather than being left on all the time.

Radislav Potyrailo, principal scientist at the GE Global Research Center in Niskayuna, US, is impressed by the work, and agrees that the applications of such gas sensors could be huge. ‘Solvent-free blending of chemically active ingredients with transducing ingredients (such as carbon nanotubes and graphite) is really innovative and far-reaching.’ He adds that the sensors could be used in areas ‘ranging from chemical leak detection, to food safety, homeland security [and] environmental testing’.