Q and A: Mercury in energy-saving light bulbs

Old-fashioned tungsten light bulbs are due to be phased out in Australia, the UK, and the US over the next five years, and the spotlight has fallen on their low-energy replacements. The new light bulbs contain mercury, which has triggered a rash of concerned media stories - but is there any fact behind the fear? Chemistry World investigates.

It’s essential to the way they work. Compact fluorescent lightbulbs (CFLs) are tubes containing mercury and noble gases (typically argon). When the bulb is switched on, electrons stream from a tungsten-coated coil. They collide with mercury atoms, exciting their electrons and creating flashes of ultraviolet light. A phosphor coating (typically composed of metal oxides or phosphates) on the inside of the tube absorbs this light and re-emits it at visible wavelengths. This is also how fluorescent strip lights work.

How much mercury do CFLs contain?

Up to 5 milligrams - a tiny amount when compared to the 3 grams in a mercury thermometer, says Adrian Westwood, from the UK Environment Agency. Fluorescent strip lights contain similarly tiny amounts, reduced from the 100 milligrams present in first-generation CFL bulbs.

Couldn’t we do without mercury in household lighting?

Not in a fluorescent light. Light-emitting diodes (LEDs) don’t contain mercury, but they’re still costly, and researchers have only just begun working out how to diffuse their focused light to suit household lamps.

Old-fashioned incandescent tungsten filament bulbs don’t contain mercury either. But more mercury is emitted by fossil-fuel fired power plants when producing electricity for the incandescent lights, than for the energy-saving CFLs. 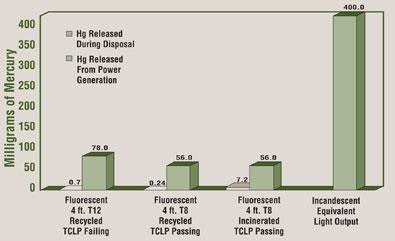 The amount of mercury released while powering and disposing of CFL bulbs is much smaller than is emitted for old-fashioned filament bulbs.

What danger is there if a CFL breaks?

’No amount of mercury is good for you, but the very small amount contained in a single modern CFL is unlikely to cause any harm, even if the lamp should be broken,’ says the UK Department for environment, food and rural affairs (Defra).

Their advice for cleaning up a broken bulb:

Vacate the room and ventilate it for at least 15 minutes. Do not use a vacuum cleaner, but clean up using rubber gloves and aim to avoid creating and inhaling airborne dust. Sweep up all particles and glass fragments and place in a plastic bag. Wipe the area with a damp cloth, then add that to the bag and seal it. Mercury is hazardous waste and the bag should not be disposed of in the bin. All local councils have an obligation to make arrangements for the disposal of hazardous household waste. 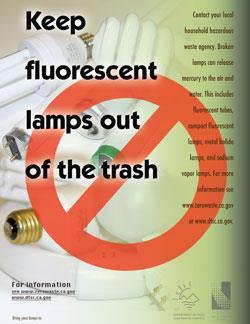 Why didn’t we know about this before?

The presence of mercury in fluorescent lights, though well known, seems not to have been well communicated to the public in the UK. But as Steve Poole, laboratory manager for the UK trade body The Lighting Association, points out, ’fluorescent technology has been around for years without this being worthy of comment before.’ Now that CFLs are seeing widespread use in households, the mercury issue has been rediscovered, leading to calls for advice on light bulb disposal to be printed on CFL packaging. The disposal advice itself has not changed.

According to the Environment Agency’s Adrian Westwood, a more important issue that people should be focusing on is how to recycle CFLs.

So how should I recycle a CFL?

CFLs are classified as Waste Electrical or Electronic Equipment (WEEE); meaning that their manufacturers and importers are required to pay for CFL treatment and recycling (for more on the WEEE Directive, see Chemistry World, June 2007, p44). Defra says that any retailer selling a CFL bulb either has to take back a waste one, or advise on how to take it to a ’Designated Collection Facilities’ set up for the purpose. There are over 1400 DCFs in the UK.

Can this fledgling recycling system cope with vastly increased numbers of CFLs, though? According to Defra, ’appropriate handling and disposal is not difficult, and what is now a relatively new disposal system will become more fully developed.’