A non-invasive way to test the quality of sperm to be use in fertility treatments has been developed by UK scientists. The team hope the technique will boost the chances of conception for couples using in vitro fertilisation (IVF) to have children.

Alistair Elfick and colleagues at the University of Edinburgh used Raman microscopy to analyse single sperm cells, assessing the quality of their DNA. The healthiest sperm can then be used in an intracytoplasmic sperm injection - a form of in vitro fertilisation used to overcome male fertility problems, in which a single sperm is selected and injected into the egg.

Current ways to assess the healthiest sperm include the ’swimming test’ - to select the fastest moving sperm - and studying the sperm cells under the microscope to pick the most uniform one, explains Elfick. But athletics and beauty contests don’t necessarily reveal the sperm with the best DNA.

’There is a clear motivation for us to come up with a better way to look at the quality of DNA that is in a sperm’, says Elfick. Biology has a wonderful way of selecting the sperm with the highest-quality DNA and ensuring that this sperm enters the egg, he adds - ’the egg is able to say: I like that one.’ And it is this selectivity that the scientists are looking to replicate. 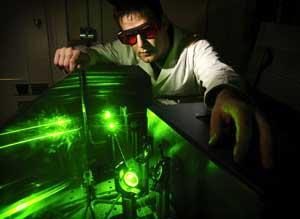 To test the sperm, Elfick’s team first capture a sperm cell using two highly focused beams of light - known as optical tweezers. The DNA is then analysed using a commercially-available Raman microscope with a near-infrared excitation wavelength that is non-damaging to the sperm cell, says Elfick. Finally, the team use statistical analysis to look for signs of DNA damage - as damaged DNA vibrates differently to good DNA - within the Raman spectra of the sperm head. And within this algorithm lies the potential commercial value of the work, he adds.

There are other ways of assaying the quality of DNA in sperm cells using fluorescent labeling, but to do so you have to destroy the sperm cell, explains Elfick. ’We’re not aware of anyone else using a technique like ours, where the sperm can still be used once it has been found to have good DNA quality.’

Ioan Notingher, from the University of Nottingham, UK, collaborated with Elfick at the start of this project and says he is looking forward to seeing the results once they are published. ’The potential [of this research] is huge,’ he says. ’It will have a big impact on IVF.’

Looking to the future, Notingher says that a huge amount of safety work needs to be done before this method can actually be used in IVF clinics, to ensure that any children born following the screening procedure aren’t harmed by the technique. ’They need to make sure that the lasers don’t leave any sort of small changes to the DNA that could be damaging to the baby,’ he says.

Elfick and his team are currently attempting to patent the work and set up a spin-off company to push this project forward, as well as working on a host of other clinical uses for Raman including looking at the health of egg cells for IVF.