UK chemistry has received a general thumbs-up from the nation’s massive 2008 research assessment exercise (RAE) - remaining ’buoyant and internationally competitive’, according to its reviewing panel.

RAE scores, which assess research quality, will determine the distribution of over ?1.5 billion of annual government funding for the next half-decade. To compare chemistry departments, a panel of sixteen senior chemists waded through 5000 research submissions (mostly academic papers) from 1200 staff across the UK. About 15 per cent of research was judged world-leading. 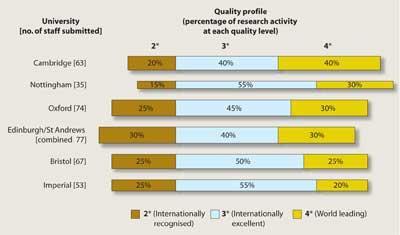 ’The overall feeling of those panel members who had also served on [the previous] 2001 RAE was that we were seeing a higher quality of research,’ says panel chair Jeremy Sanders, of the University of Cambridge. Admittedly, the panel had no reliable information on whether departments held back weaker staff from the assessment - though to discourage such game-playing, funding is decided by a multiple of staff volume as well as research quality.

In total, the number of chemistry staff put forward for the RAE dropped only slightly from the previous exercise. But the number of UK chemistry departments submitted to the RAE has shrunk from 45 in 2001 to 31 last year (though two of these were joint entries from Scottish departments, while Manchester and UMIST have merged), suggesting that researchers are concentrated in a smaller number of institutions.

This partly reflects the closure of some departments - such as Exeter and King’s College London - but also that existing chemistry departments may have strategically reclassified themselves under areas such as pharmacy or biology for assessment purposes. ’You don’t get a complete view of UK academic chemistry research based just on what we saw,’ Sanders agrees.

The single-grade scoring system of 2001 is replaced by a more finely-grained ’quality profile’, showing each department’s percentage of research in five levels, from ’world leading’ down to merely ’nationally recognised’ or below. Whether this system will lead to more widely distributed funding is unclear. The decision in 2001 to concentrate funding only to the highest-scoring departments was partially blamed for subsequent chemistry department closures (Chemistry World, April 2007, p43). The all-important funding formula will be revealed on 4 March.

With fourteen chemistry departments lopped from the RAE table this year, the overall quality of those remaining is generally high. ’If you consider the spread of numbers there is very little differentiation between most departments,’ comments Dave Garner, RSC president and RAE panel member. ’The vast majority come out very strongly.’ As usual, however, larger departments with greater resources scored better: Cambridge, top of the pile, had 40 per cent of its submitted chemistry research judged world-leading. Notably, Nottingham took second place on research quality, despite submitting only half the staff of close challengers.

Nottingham’s head of chemistry, Mark Searle, says the result vindicates the department’s investment in physical chemistry and in nurturing young talent. He adds that the department left out only four staff from assessment.

Near the bottom, Reading’s chemistry department are ’a bit disappointed,’ according to their head Matthew Almond, though he is confident the university will support them through potentially leaner funding. ’The department is on a strong upwards curve not reflected in the results,’ he says, pointing out that the RAE is a ’historical snapshot’ based on research conducted as far back as 2001.

Particular UK research strength, the panel noted, lay in atmospheric chemistry; chemical biology; organic synthesis; computational methods; green chemistry; surface science and catalysis; solid state and materials chemistry; and supramolecular and nanoscience. But the panel warned that chemistry should beware of neglecting its core in the excitement of collaboration with other disciplines - something that smaller departments have embraced in particular.

The 2008 RAE was the sixth and final exercise to judge university research using panels of academics to review each discipline. It will be followed in 2013 by the REF (research excellence framework), an assessment using metrics such as research grant income. This may save time and money and allow a more continuous assessment. But hardly any researchers think metrics alone will suffice without some accompanying peer review.