A petition bearing 18,000 signatures calling for the abandonment of economic impact assessment in research funding applications has been delivered to the Higher Education Funding Council for England (Hefce).

In September, Hefce revealed that economic and social impact will make up 25 per cent of assessments under proposals for the Research Excellence Framework (REF) - the new system for assessing research quality in UK higher education institutions being introduced in 2013. The move provoked anxiety among academics, concerned that a focus on impact would cause basic research to be neglected.

"Science is about skill, dedication, professionalism, and luck - you have to take a punt" - Lee Cronin, University of Glasgow

A campaign spearheaded by the UK’s University and College Union (UCU) has now collected 18 000 signatures on a petition calling for the current REF proposals to be withdrawn and for funding councils to work with researchers to construct a new regime that ’fosters basic research rather than discouraging it’.

’Academic research should never be at the behest of market forces,’ Alex Rossiter of UCU told Chemistry World. ’The whole beauty of research in the science sector is that you do research to find things out, and you can’t always have a preconceived goal beforehand. Our concern is that these new impact indicators will actually achieve the opposite of what they set out to.’

Six Nobel laureates, including four Nobel prize winning chemists, joined thousands of academics and researchers in signing the petition, which was submitted to Hefce today, on the final day of the second consultation into the REF proposals. 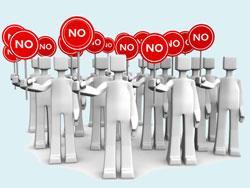 Thousands of academics and researchers have signed the petition

Lee Cronin, professor of chemistry at the University of Glasgow, UK, believes the emphasis on impact could lead to a false picture of science being portrayed to the public. ’We’re telling the public that our research is deterministic - it’s not,’ Cronin told Chemistry World. ’It’s a massive rollercoaster of failure and inspiration and I think that if we don’t tell the public that, we’re actually losing something that is the soul of science, the soul of discovery.’

Cronin’s worry is that by focusing on impact, the public will see science purely as a means to predefined end, rather than a drive to push at the boundaries of knowledge to see what lies just beyond reach.

Since the criticism started flowing in September, Hefce has insisted that the REF will not sideline blue skies research, and says that such claims are ’based on a misunderstanding of our proposals’. The grants awarded under the REF can be distributed by universities in any way they see fit, the council says, and researchers ’will not be required to predict impact, but to demonstrate impact where it has already occurred.’

’We will certainly not expect every academic to deliver impact but will look to the collective impact of academics working together in universities,’ the organisation said. ’We will not be looking at every piece of research.’

While the official REF consultation period ends today, Hefce is also running a pilot exercise to develop the impact proposals, which will conclude in summer 2010. The REF proposals, Hefce says, will be refined based on evidence and experience, ’not on assertion’.

However, Hefce’s insistence of objectivity may fall on deaf ears if the impact assessment remains in the REF. ’The very fact that 18 000 academics from across the science and humanities have signed the petition really shows the strength of feeling that there is amongst the academic community against these proposals,’ Rossiter says.