A way to re-sensitise certain drug-resistant breast cancers to treatments such as Tamoxifen could offer better treatment for people with hard-to-beat cancers. Swedish researchers hope that the combination of the anti-cancer drug Tamoxifen with a signalling protein mimic Foxy-5 will increase survival rates of patients with cancers resistant to Tamoxifen and related endocrine therapies.

Caroline Ford and colleagues at Lund University, Malm?, Sweden, have investigated a way to re-establish sensitivity of breast cancer cells to Tamoxifen. Tamoxifen is a widely used drug that binds to the cancer cell’s oestrogen receptors, inhibiting cell proliferation and inducing cell death. However, up to a third of breast cancers do not have oestrogen receptors on their surface - making them insensitive to this type of therapy. ’Endocrine receptor alpha negative patients have lower survival rates than those with other types of breast cancer, probably because they have fewer therapeutic options,’ says Ford. ’We are trying to give these patients a new therapeutic option,’ she explains. 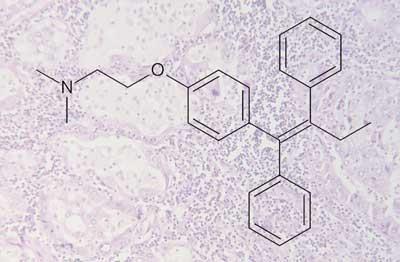 Wnt-5a also inhibits cell migration and increases cell adhesion, meaning it stops the cancer cells moving around the body - known as metastasis - and causing secondary tumours. Last year the Lund team reported that their Wnt-5a mimic, a hexa-peptide called Foxy-5, could reduce metastasis of cancer cells in mice by 70 per cent. Foxy-5 was designed as a much smaller version of Wnt-5 that would have the same properties, explains Ford. ’Wnt-5a is a really large protein that would be hard to get to the cells we want it to reach.’

Ford’s team have now shown that, in the test-tube, Foxy-5 mimics Wnt-5a signalling and re-establishes endocrine receptor expression in oestrogen receptor negative cell lines. Crucially, they also showed that these cell lines were then sensitive to attack by Tamoxifen - proving the therapeutic potential of the dual approach. ’We have proved that Tamoxifen and Foxy-5 work together well in the lab,’ says Ford, ’and now we want try these them together in an animal model.’

Alison Ross, Cancer Research UK’s senior science information officer, said: ’It’s encouraging that these preliminary results indicate that the Foxy-5 molecule may switch on the oestrogen receptor in breast cancers in mice, but it’s still a long way before we will know whether these approaches will work in humans, as most of the experiments were carried out in cells grown in the lab. But this new way of sensitising oestrogen-receptor negative breast cancers to the drug Tamoxifen is potentially exciting, as currently there are fewer treatment options available for these women.’

While other people have thought of the idea of trying to re-express the oestrogen receptor in patients, all these previous approaches had draw-backs, explains Ford. Other studies have used transfection - which is the introduction of nucleic acids into cells. ’They have seen similar results to us in the lab. But you can’t do that in an actual person,’ explains Ford. Another large field of research is into drugs called demethylators - that undo the silencing of the gene that codes for oestrogen receptor expression. ’These drugs act to allow the oestrogen receptor to be expressed again,’ explains Ford, ’but there are concerns about their toxicity, and the fact they are not very specific - they can potentially demethylate any genes in the body.’