Ricin antidote on the horizon

For the first time, compounds that protect against ricin poisoning have been identified by French researchers. It’s hoped the research could lead to an antidote for the poison, which is a thousand times more toxic than cyanide.

Banned under chemical weapons conventions, ricin became infamous when a modified umbrella-gun containing a poisoned pellet was used to kill Bulgarian dissident Georgi Markov in 1978. Although not as potent as synthetic nerve agents, ricin is obtained from a natural source - the castor bean - so could potentially be more easily obtained by terrorist groups.

Research has been undertaken into an antibody-based vaccine and antidote at the Defence Science and Technology Laboratory in Porton Down, Wiltshire, UK, but they are not yet widely available. 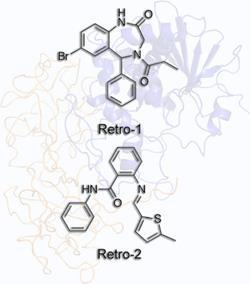 Retro-1 and Retro-2 could protect against ricin poisoning

’There is currently no antidote for ricin intoxication,’ says Daniel Gillet, who led the project at the biological research division of the French Atomic Energy and Alternative Energies Commission (CEA). In collaboration with Ludger Johannes at the Curie Institute in Paris, the team screened 16,480 different compounds to search for any that offered protection. Of these, two were found to protect mice from being killed by a lethal dose of ricin - and were surprisingly low in toxicity themselves.

Ricin causes harm by cleaving important bonds in RNA ribosomes - cellular factories that produce proteins from amino acids. Without proteins being produced, the cells die. The two new compounds - named Retro-1 and Retro-2 - are thought to offer protection by blocking the route through the cell that ricin uses to reach the ribosome.

However, the activity and potency of these two compounds needs to optimised, Gillet told Chemistry World. ’At the moment, if we were to treat a human we would need a very big pill,’ he says.

’This work opens a route for developing pharmaceuticals that could be used in a prophylactic way to prevent ricin poisoning, but also develop antidotes to treat after poisoning,’ says Alastair Hay, a toxicologist at the University of Leeds, UK.

Retro-1 and Retro-2 may also find roles in fighting virulent bacterial toxins (called Shiga toxins) that attack cells with a similar mechanism, Hay adds. ’Significantly, the effectiveness of these two compounds might treat other toxin-related illnesses such as that caused by cholera or E.coli  because their toxins follow a similar route to the ribosome,’ he says.