Roll up, roll up!

Indian chemists have addressed an interesting and unusual question: how do you make something roll uphill?

Scientists in India - inspired by research on making water run uphill - have developed a technique that enables a polymer cylinder to not only autonomously climb an incline but carry a weight with it.

There are a number of different approaches towards limbless locomotion, but they focus on using mechanical or chemical pulses to drive a body forwards. Researchers from the Indian Institute of Technology in Kanpur have taken another approach: rolling. 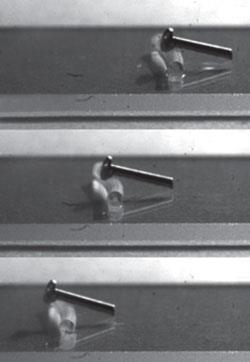 A sequence of images captured at 0, 1.43 and 2.87 seconds (top to bottom) showing a 4mg polymer cylinder dragging a 18mg screw across a horizontal surface

The team, led by Animangsu Ghatak, used the swelling interactions of an elastomeric cylinder and a solvent to drive the cylinder forward. When the solvent is released, it spreads along the cylinder and swells at the contact points, particularly at the ends. This pushes the centre of mass forward and the rest of the cylinder moves to keep up via a rolling motion, which drags solvent with it. Because of this rolling motion, dry polymer is brought into contact with the solvent and swells in turn. The saturated polymer is exposed to the air and the solvent evaporates, forming a swelling-evaporation-de-swelling mechanism and enabling autonomous movement as long as the solvent lasts.

The most unusual aspect of the system, Ghatak explains, ’is that gravity can be used to increase the asymmetric effect and thus the resultant increase in velocity’. By increasing the incline, ’the solvent tends to accumulate more in the rear side of the cylinder than in the front and as a result, the asymmetric effect becomes more pronounced and the cylinder bends more’. This greater bend not only increases the velocity but creates enough torque for the cylinder to carry a dead weight with it.

Mark Geoghegan, from the University of Sheffield, UK, points out that although this technique will not scale up to the macro-scale, the field of self-powered locomotion is still very young. ’This is an exciting area of research and one expects the benefits to be reaped only years in the future,’ he says.

Both Geoghegan and Ghatak can also see more immediate uses for the technology - despite the early days - and highlight potential roles in sensing or soft robotic components.