Common table salt - normally a brittle crystalline material - can be pulled into nanowires that will extend by more than twice their own length without breaking, US researchers have found.

Nathan Moore and his team at Sandia National Laboratories in Albuquerque, New Mexico, were investigating water adsorption onto salt crystals using an interfacial force microscope (IFM) to probe the salt surface when they stumbled upon their discovery.

’When we poked the salt surface, we saw some unusual force behaviour [between the tip of the microscope probe and the surface]. It seemed crazy at the time, but we thought: "could we be making nanowires?" - of course, seeing is believing, so we put salt in the [transmission electron microscope] and there we saw the nanowires!’ (see video at bottom of page) 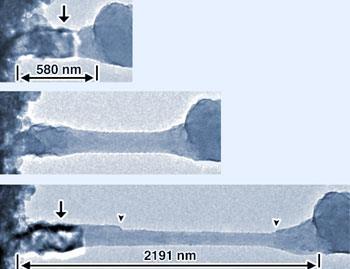 Surprisingly, the salt not only becomes ductile (i.e. able to be pulled into wires), but the wires are also superplastic - they can be extended by more than their own length before breaking. This unusual property is more normally associated with metals and certain ceramics, rather than ionic crystals like salt. The wires can also be compressed back into the crystal, but do tend to bend and buckle.

Part of the cause of this unusual superplasticity could be down to the microscope itself - the beam of electrons from the probe tip, which is used to form the image, can break up the surface of large salt crystals into tiny grains. This allows rapid diffusion of atoms along the grain boundaries, allowing the wires to deform rather than break.

Bombarding salt with the microscope electron beam can also displace chloride ions from the crystal lattice and cause electrons to recombine with sodium ions to form metallic sodium. ’Elemental analysis of the nanowires shows that the composition is predominantly sodium chloride,’ says Moore, but there is a reduction in the proportion of chloride. This means that metallic sodium - which has less directional bonding and can also conduct, so could help dissipate charge from the electron beam - could be further improving the superplastic properties of the nanowires.

To see how much of an effect the electron beam has on the growth of the wires, the team tried pulling one out with the beam turned off, turning it back on to get a quick image every so often. They still saw massive elongation of the nanowire, although nowhere near as much as with the beam on, and the wire did eventually break. ’It’s very clear the electron beam enhances the superplasticity,’ comments Moore, ’but we don’t know yet whether or not the electron beam is required to start the wire off.’

’Plasticity [of salt] on this scale is very interesting and also quite surprising,’ says Florian Banhart, from the Institute for Physics and Chemistry of Materials (IPCMS) in Strasbourg, France. ’Atomic diffusion is quite a likely explanation for this behaviour as there will be a strong charging effect under the beam, which could create defects in the structure, so diffusion would be enhanced. What is quite convincing is that they see a difference between the situation with and without the electron beam.’

Moore thinks that the possibility of forming nanowires on salt surfaces could have implications in understanding the properties of geological salt deposits and sea salt aerosols, and perhaps help improve understanding about the role salt plays in cloud nucleation and smog formation. ’The fundamental aspects of this are very interesting - you have to wonder if, for example, sea salt particles in the atmosphere are doing the same thing when they collide - are they forming nanowires?’