The 2007 Nobel Prize in Physics has been awarded to Frenchman Albert Fert and German Peter Gr?nberg, for their discovery of giant magnetoresistance (GMR). The effect makes it possible to read densely-packed data storage devices, paving the way for today’s tiny, high-capacity computer hard drives.

In 1988, Gr?nberg and Fert independently announced that thin multilayers of iron and chromium showed a huge change in electrical resistance when placed in magnetic fields. As both researchers quickly realised, the surprising effect meant that small magnetic changes in the materials greatly affected electron flow. The tool was perfect for reading data from hard disks, where information stored magnetically has to be converted to electric current. Gr?nberg quickly patented the discovery, and by 1997 the first read-out head based on GMR was launched by IBM.

’It’s probably the most rapidly-developed scientific discovery ever, in terms of technology - within 5 or 6 years of the initial discovery, researchers were looking at commercial production,’ Mark Blamire, who works on magnetic devices at the University of Cambridge, UK, told Chemistry World. 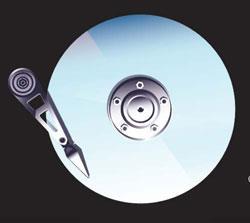 The hard drive: less than a decade from pure science to global impact

In Fert and Gr?nberg’s original systems, a layer of non-magnetic chromium was sandwiched by layers of ferromagnetic iron. If the atomic spins in successive iron layers were oriented in the same direction, making the overall magnetisation of both layers parallel, electrons could also align their spins and pass through the material with little resistance.

But electrical resistance shot up when the second iron layer had its magnetisation aligned antiparallel to the first. That’s because the electrons which had oriented their spins with one set of iron atoms were then scattered on encountering the next layer. Fert’s team used a series of iron layers with alternating magnetisation, which strengthened the effect on electron flow.

This phenomenon - which Fert called giant magnetoresistance - provided a way to detect the magnetic field alignment of tiny segments of a magnetic disk, used to store bits of computer data. The giant magnetoresistive material in a read ’head’, hovering over the spinning hard disk, has its magnetisation changed by the bits of data flying beneath it. This in turn alters the flow of electrical current through the read head, creating a relatively strong signal from a tiny magnetic field - and using smaller magnetic domains allows much denser data storage.

In GMR’s wake has come a more sensitive effect called tunnelling magnetoresistance (TMR), where an insulating material acts as the sandwich, which electrons can move through by quantum tunnelling. GMR also paved the way for a new field of electronics called spintronics, where an electron’s spin - manipulated with magnetic fields - is used as the basic component of binary data.

Fert and Gr?nberg’s success rested on chemical techniques that allowed them to make thin layers of different materials. ’The discovery depended on the ability to grow and deposit metallic films at nanometre length scales with high precision,’ said Blamire. In the laboratory, the scientists built up the layers by depositing atoms from low-pressure gases of iron and chromium; but the technology really took off commercially when IBM’s Stuart Parkin achieved the same effect with industrial-scale sputtering techniques.

’It serves as a timely reminder that important fundamental breakthroughs in physics can have long-lasting significance and that the results of research being undertaken now, in a wide range of areas, will no doubt be primary drivers in how we live and work in another thirty years’ time,’ said Peter Main, director of education and science at the Institute of Physics.

Spinning into a new era of computing

Flipping a spin is easier and faster than moving around electrons. So are we going to switch to spintronics? Michael Gross investigates.