Sensor a snug fit for glucose

A simple approach to making sugar-binding molecules provides a route towards practical glucose-sensing devices. UK researchers say their sensors could one day be used in cutting edge medical implants to give continuous blood sugar level readings.

Well established tests can gauge the sugar level in a sample of blood from a diabetic. However, continuous monitoring of blood sugar levels inside the body is challenging. Researchers have been searching for highly specific sugar-sensing molecules that can tightly bind glucose, emulating the performance of sugar binding lectin proteins. The problem is that carbohydrate molecules like glucose are hard to pick out – their hydroxyl groups are almost indistinguishable from those of water molecules. 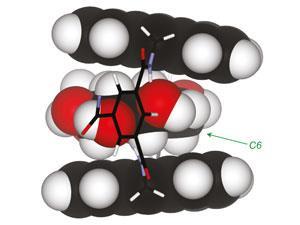 Anthony Davis and colleagues at the University of Bristol created a snug fit for glucose by synthesising a lectin-like molecule in just five steps, from commercially available starting materials. Instead of targeting the well-disguised –OH groups of glucose, the team focused on its hydrophobic –CH groups. ‘Our idea was to create a cavity where you have hydrophobic patches top and bottom, which are complementary to hydrophobic patches on the glucose,’ says Davis. ‘We think that those interactions are really where most of the binding comes from.’

Despite being easier to make, the sensors match the performance of other lectin mimics and work at body temperature. Aromatic units provide a built-in glucose tracking system – they fluoresce under UV light, glowing more intensely when bound to their glucose targets.

‘I think it’s a beautiful study,’ says medicinal chemist Binghe Wang of Georgia State University in Atlanta, US. ‘To be able to build a system with this kind of simplicity and all the functions to detect glucose is just remarkable.’

Short to medium-term applications include bedside monitoring of blood sugar levels for patients in intensive care. Sensor molecules could be embedded in a gel and inserted into the bloodstream on the end of a fibre optic cable. Eventually, such devices could be used in implants that would give diabetic patients constant blood sugar read outs. ‘We’re a long way away from that,’ admits Davis. ‘The first problem that we have to solve is how to get the message from the device that’s implanted to something, like a watch, that is outside the body.’

According to Wang, similar design principles to those employed by Davis’s team could be applied to create sensors for other kinds of sugars, such as those that act as cell markers for cancer and certain infections.