Chinese chemists have demonstrated a speedy way to make polypeptides by avoiding the costly tedium of linking together amino acids.

Traditionally, polypeptides are made by stacking amino acids together using a series of solid supports - a process which won Bruce Merrifield the 1984 Nobel prize in chemistry. But first making the amino acids, then activating or protecting them with special reagents to make sure they react in the right order, is an expensive and rather tedious business, though it can be automated.

Instead, Huailin Sun and colleagues at Nankai University made polypeptide chains by finding a catalyst which strings together carbon monoxide and imines - cheap, plentiful molecules - in a perfect alternating sequence. ’This is the shortest possible route for chemical synthesis of polypeptides,’ Sun told Chemistry World.

The inspiration came from industrial reactions which use metal catalysts to co-polymerise very simple monomers into long polymers. Adapting this concept to peptide synthesis was first suggested almost a decade ago, when Bruce Arndtsen’s team at McGill University, Montreal, and Ayusman Sen’s group at Penn State University, US, independently reported that imines would insert themselves between an acyl-palladium bond. But after this promising first reaction step, the nascent polypeptide fastened strongly to palladium, blocking all other incoming monomers from adding to the chain.

Sun’s team tried a new catalyst based on cobalt, less prone to irksome coordination. With careful fine-tuning, they managed to keep imines and CO inserting themselves alternately, and to stop the polypeptide detaching itself from the metal until it had reached a reasonable length. ’This work is a breakthrough,’ commented Arndtsen. 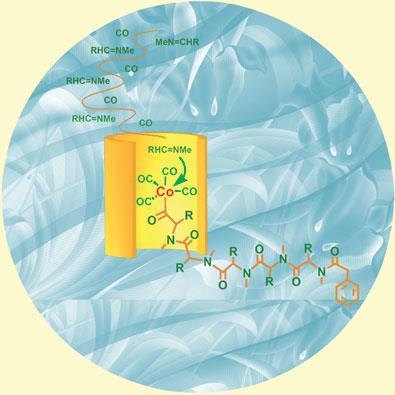 Sun’s method, though fast and cheap, can’t yet make custom proteins with amino acids in a defined sequence; if different imines were thrown into the mix, they would add randomly to the growing chain. It could, though, be a useful shortcut to quickly produce polypeptides with long repeated amino acid sequences, such as homopolymers or block copolymers.

The usual way of producing homopolymers is by a ring-opening polymerisation of amino acid precursors, but Sun’s starting materials could be cheaper than these precursors, said Daniel Siegwart, of Carnegie Mellon University, US.

Neil Cameron, who works on polymer synthesis at Durham University, UK, suggests such homopolymers or block copolymers could be used to make biocompatible coatings or hydrogels around which tissues could grow.

Sun told Chemistry World that several companies were interested in his work, which was patented. He hopes to design new, improved catalysts which can cope with a greater variety of incoming monomers. And, he points out, since his copolymerisation strategy is the quickest way to make amino acid chains without invoking enzymes, it might even have been adopted by nature for the prebiotic origin of polypeptides.