Scientists can now experiment at the atomic scale with unprecedented accuracy in new ‘silent’ laboratories in Switzerland. These labs are shielded against all possible forms of background disturbances – external vibrations, acoustic noise, electromagnetic fields and temperature fluctuations. It is hoped that the labs, devised by Emanuel Lörtscher and his team at IBM Zurich, will accommodate the demands of nanotechnology for the next 20–30 years. 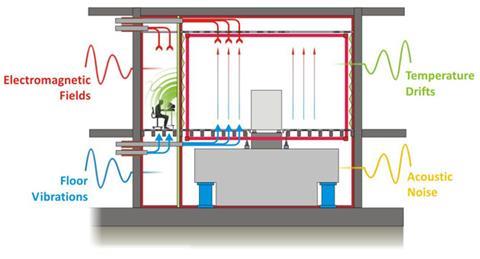 When probing or building structures at the nanoscale, experimental readings are so tiny that they are easily drowned out by any background noise – without a well-proofed lab, someone using the lift next door could ruin your results.

Many impressive noise-free labs have been built, but often they only block out one type of noise effectively. Lörtscher’s group set out to accomplish simultaneous reduction of all types of disturbances. The construction site chosen was next to a motorway and above an underground railway tunnel, intensifying their challenge.

It took three years of planning and testing before the labs at the Binnig and Rohrer Nanotechnology Center were built. Combining all approaches to block each particular source of noise together was the greatest challenge according to Lörtscher. Everyone involved had to be made aware of each other’s concerns. ‘The success of the project was mainly due to the fact that all partners developed custom-made solutions compatible with the other components.’ 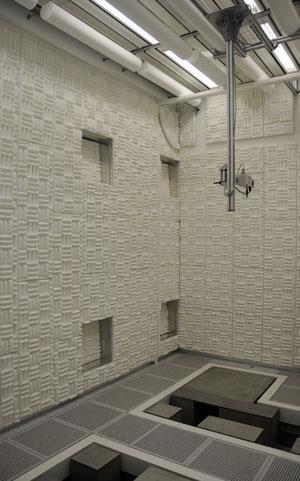 A noise-free lab in the Binnig and Rohrer Nanotechnology Center

Design features include foundations built directly onto the bedrock, which make the floors stable against vibration, and an air-conditioning system that injects air upwards through the permeable floor in non-turbulent streams. Furthermore, experiments can be controlled from outside by remote control.

Hal Amick, an expert in low-vibration environments at Colin Gordon Associates in California, US, is impressed by the work: ‘the team has demonstrated several different approaches to achieving superb environments in a very challenging setting.’

‘Creation of quiet space is the holy grail in the world of designing high-performance research facilities,’ says Amick, but future labs cannot simply copy Lörtscher’s design. ‘We can’t really allow one-size-fits-all thinking’, he explains, as designs depend on the environment and the technology to be used in a facility.

Only two years after completion, the Swiss labs are already hosting cutting-edge nanotechnology experiments. ‘The silent lab has opened up a whole new spectrum of experiments,’ says Lörtscher. In the near future a transmission electron microscope with the highest resolution in the world will be installed.

Lörtscher’s team are happy with the performance of their labs, but still plan to go beyond what they have achieved in terms of electromagnetic fields and temperature stability. ‘The nice thing is that the lab has the flexibility to implement these ideas,’ he concludes.