Ionic liquids could hold the key to the production of designer silk say US researchers. David Phillips and colleagues from the Air Force Research Laboratory, Air Force Office of Scientific Research, and the US Naval Academy have used an ionic liquid solution to develop a new method of spinning silk fibres. 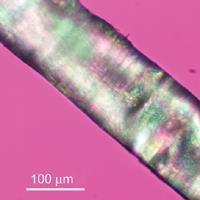 The technique could be used potentially to produce silk fibres with enhanced mechanical and optical properties. Silk fibres have outstanding natural properties which rival the most advanced synthetic polymers, yet unlike synthetic polymers the production of silk does not require harsh processing conditions. Possible exploitation of these properties for speciality applications has led to widespread investigation into novel processing techniques for silk fibre production.

Silk fibroin is harvested from Bombyx mori silkworm cocoons. It is then usually subjected to a number of processes before it is dissolved in a solvent and spun into fibres. Philips found that by using organic-based ionic liquids-green, non-volatile solvents with easily tuneable properties-this overall process can be greatly simplified. The use of ionic liquids in this application should therefore make the production of customised silk possible, as the solvent can be chosen to optimise the desired properties of the product.

"The introduction of ionic liquids to silk processing opens an exciting avenue for controlling the microstructure to tune the macroscopic properties." - David Philips

Phillips and his team removed the glue-like sericin coating from the cocoons and dissolved the silk in the ionic liquid 1-ethyl-3-methylimidazolium chloride (EMIC). Silk fibres were then spun from this solution and treated with methanol, producing crystalline fibres. The reelable fibres obtained from this wet spinning technique could be tested for their mechanical properties.

This tailoring of mechanical and optical properties means that one of nature’s finest materials could soon be improved. ’The introduction of ionic liquids to silk processing opens an exciting avenue for controlling the microstructure to tune the macroscopic properties,’ said Phillips. It is hoped that it this method will also be used to improve the spinning of other natural fibres.