A single molecule, trapped between two electrodes, acts as a switch and has a ’memory’ of the type used in data storage, Swiss and US researchers have found.

Heike Riel of IBM’s research labs in Zurich says this is ’a step along the way’ to making nanoscale electronic components a reality.

Using single organic molecules as electronic components could allow researchers to miniaturise circuits far more than conventional techniques allow. They also avoid the interactions between the millions of molecules found in a standard transistor that can disrupt the conduction of charge. 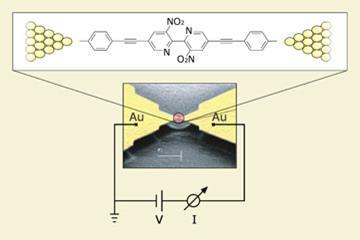 A positive voltage pulse between the electrodes was enough to change the molecule so that it became a better conductor of current, while a negative voltage returned the molecule to its less conductive state.

These distinct ’on’ and ’off’ states correspond to the ’1’ and ’0’ in the binary language used to store electronic information. The team found that the molecule could be switched on and off repeatedly, and could also be ’read’ by measuring the current flowing through it. The findings are published in the current issue of Small1.

’The origin of the switching is an inherent property of the molecule’, Riel told Chemistry World, and does not arise from interactions with the electrodes or the molecule-metal interface.

While this technique is designed to test properties of single molecules, nanoelectronic devices could contain 10 to 20 molecules in parallel, Riel suggested.

This switching effect has also been studied by James Tour of Rice University, Houston, US, who saw the potential of the same molecule for memory storage and reported in the journal Nano Letters last month that they had constructed nanoscale transistors from single BPDN-BT molecules in contact with three electrodes2.

David Carey, a nanotechnology researcher at the University of Surrey, Guildford, UK, agreed that this approach could lead to a new generation of nanoelectronic components, describing Riel’s research as an ’interesting piece of work’. But he added that the system could be improved by a ’stronger, more reproducible current’ when the molecule is switched on.

Riel’s group is now trying to work out exactly what happens to the molecule during the switching process.
Tom Westgate

Researchers in the UK have coupled a virus with redox-active molecules, creating particles they say could be useful in nanoelectronics.

Chemists switch over to molecular computing

Rectifying a problem in nano-electronics