Many researchers working with nanomaterials use inadequate protection, if any at all, claims new study

Many researchers working with nanomaterials use inadequate protection, if any at all, and most don’t use special disposal methods for nanomaterials, claims a new study.

As most nations don’t have specific regulations for nanomaterials, rules to protect researchers fall to individual institutions. Nearly half of the 240 respondents to a survey analysed by a team at the Nanoscience Institute of Aragon at the University of Zaragoza in Spain reported that no regulations were enforced by their institutions, and another 27 per cent were not sure.

Assessing risks posed by nanomaterials is a complicated matter, as the study authors themselves point out, because potential dangers depend on several factors including size, shape, chemical composition, and solubility. So far, most studies have focused on toxicity and mortality rather than the chronic exposure experienced by scientists in labs. Standard, acceptable levels of exposure have not yet been determined.

’We are nanotechnology researchers ourselves, and many times we are faced with the problem of how to handle our materials, how to avoid contamination, how to dispose of them, and so on,’ says co-author Jesus Santamaria. 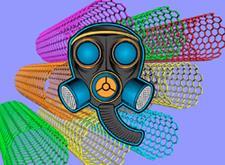 Santamaria’s team then asked about protective equipment - lab equipment such as local extraction or fume hoods, and personal protective wear, particularly face masks. Curiously, when it comes to laboratory safety, those who responded that particles could become airborne were similarly equipped to those who said no, with nearly 40 per cent using inadequate protection or none at all. Only about 10 per cent of the respondents who were aware of some risk of airborne particles used special filters in their fume hoods.

On the other hand, those who said particles may become airborne were twice as likely to wear a face mask, although two thirds of them wore either no mask at all or a mask with no filters. And while 81 per cent of the respondents believe that nanomaterial waste should be treated as hazardous unless proven otherwise, 85 per cent reported that they treat the disposal of these wastes as they would chemical waste, or they employ no special procedures.

’Even without knowing the nanospecific risks of airborne particles it should be clear to anyone that our lungs should be protected from the inhalation of any sort of particles,’ says Samuel Halim, CEO of Swiss startup company Nanograde. In his experience, researchers are more cautious than the report suggests, though he also notes that risk awareness has increased significantly over the last decade.

Santamaria recognises that we inhale millions of naturally produced nanoparticles just by breathing ordinary air, and most nanomaterials are no more dangerous than other chemicals already in use. However, new materials with the ability to infiltrate cell membranes and even cell nuclei are currently under study, and he believes that now is the time to give precautions greater consideration.

Governments are still wrestling with the regulation of nanomaterials. The UK and US have established voluntary systems to gather data from manufacturers - what materials they make, how much, and for what purpose - but the participation rate has been low.

Last year, Canada passed legislation to implement mandatory reporting, and earlier this month, US senators submitted a bill for the Nanotechnology Safety Act of 2010, which would provide $25 million (?15.5 million) per year for the assessment of health and safety of nanotechnology in everyday products and development guidelines for companies that use nanomaterials.