A simple microfluidic device requiring no pumps or valves can be used to screen for suitable protein crystallisation conditions, claim US researchers.

The device called a SlipChip, designed by Rustem Ismagilov and his team at the University of Chicago, can screen up to 48 different reagents against a single substrate without the need for bulky additional equipment - meaning it can be used in a resource-poor environment.

The SlipChip consists of two glass plates sandwiched on top of each other, with a thin layer of lubricating fluorocarbon between them. The top plate is etched with a series of wells, and the lower plate has both wells and ducts on it surface. To use the device, the wells in the bottom plate are first filled with the 48 different regents. The lubricant was the placed on top, followed by the upper plate. 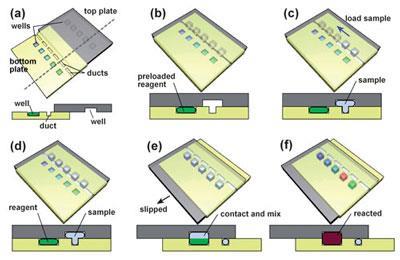 Step by step schematic drawings showing the operation of the SlipChip

When the plates are slipped over each other - and aligned so that the ducts in the lower plate and the wells in the upper plate line up - fluidic paths are formed. It is through these paths that the sample is loaded into the device, explains team member Liang Li.

The plates are then slipped again, so the upper and lower wells become aligned, and diffusion and mixing initiates the reaction between the reagents and the substrate.

To demonstrate the power of the SlipChip, the team have been using it to test different experimental conditions for crystallising proteins from a number of bacteria including the Mycobacterium tuberculosis - that causes the disease tuberculosis.

The SlipChip isn’t just for protein crystallisation though. As Li explains, ’biological assays such as immunoassays, chemical synthesis, and drug screening - all which involve multiplexed reactions - can potentially use this SlipChip method.’

’Establishing compatibility with cell phone based read-out is especially attractive for this simple device,’ said the team. Experiments that this device can be used to carry out in resource-poor setting include diagnostics and evaluation of food, water and air quality, they added.

Aaron Wheeler, a microfluidics expert at the University of Toronto, admires the SlipChip’s simple design without the pumps and valves normally seen in microfluidic devices. ’Microfluidics is struggling a little bit as a discipline because we’re so in love with the technology and we like making things high-tech,’ he told Chemistry World. ’This particular approach goes the other direction. I think it has a fair shot at being an important innovation because you can imagine it being automated and pretty robust.’