Solar cells reach into the infrared

A dye molecule that efficiently harvests the energy of near infrared light could boost the output from the next generation of solar cells.

A dye molecule that efficiently harvests the energy of near infrared light could boost the output from the next generation of solar cells.

The dye, a zinc phthalocyanine compound, has been developed by Michael Gr?tzel of the Swiss Federal Institute of Technology, Lausanne. 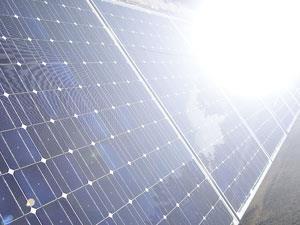 ’This is a breakthrough in the design of infrared sensitisers,’ said Gr?tzel. Since about half the Sun’s energy arrives at near infrared frequencies, the dye will increase the amount of sunlight that can be harvested by panels mounted on the roofs of houses.

Gr?tzel was instrumental in developing the dye-sensitised solar cell (DSC) some 15 years ago. Whereas conventional silicon-based photovoltaics use the same material to harvest light and turn it into an electrical current, DSCs rely on two different compounds for these tasks, just like photosynthetic plants. While ruthenium-based dye molecules are responsible for capturing visible light, a thin layer of nanocrystalline titanium dioxide produces the electrical current. Titanium dioxide is a common mineral found in paints, toothpaste and sunscreen.

This makes the DSCs relatively cheap, and Gr?tzel believes that panels built using this technology should be able to pay for themselves in less than a year - a sharp contrast with silicon photovoltaic panels that sometimes take 20 years to become financially worthwhile for homeowners.

Gr?tzel suggests that the near infrared dyes could be used with the ruthenium dye, boosting the overall efficiency of the cell by around three per cent. ’It’s one of the most exciting developments in solar cells,’ commented Zakya Kafafi, an optoelectronics researcher at the US Naval Research Laboratory, in Washington DC.