Some pesticides can reduce soil fertility

Pesticides developed to boost crop yields could be doing the opposite

Some pesticides developed to boost crop yields could be doing the opposite in the long term, report US researchers. 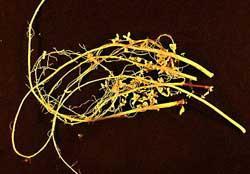 Sustainable agricultural practices often use crop rotation: growing a different crop in the same soil each year. Alternating crops that fix nitrogen in the soil - so-called leguminous crops, such as beans or clover - with crops, like wheat, that don’t fix nitrogen, enables soils to replenish nitrogen levels routinely. Leguminous plants contain root nodules that use soil bacteria to fix nitrogen, a process that converts atmospheric nitrogen into useful compounds like ammonia.

Fox’s team tested several common pesticides on leguminous alfalfa plants, relying on the plants’ nitrogen-fixing bacteria to provide the nutrients. The insecticides methyl parathion (not used in the UK, but widely used throughout the world, and registered in at least 38 countries) and DDT (which was banned by the World Health Organization for almost 30 years, before being reinstated in 2006 as an effective intervention against malaria) showed a decrease in crop yield of about 20 per cent. Treatment with pentachlorophenol (whose use is restricted in Europe to specialist timber applications), showed a decrease in crop yield of over 80 per cent.

None of these chemicals are toxic to the plant or to bacteria, so the decrease in yield is not straightforward.

Nitrogen-fixing bacteria are nature’s fertiliser. They play a key role in farming worldwide. Replacing them with synthetic fertilisers would cost over ?5 billion a year, estimate agronomists. Unfortunately, today’s intensive farming methods do not help - for example, tilling the soil interrupts root structures and disturbs underground communities of bacteria. Even if fields are left fallow and not sprayed with pesticides, the chemicals can still get into the soil through groundwater or irrigation systems.

Penny Hirsch, a soil science expert at Rothamsted Research, Hertfordshire, UK, told Chemistry World: ’We have known for a long time that certain chemicals can inhibit nodule formation, but it is useful to know that the problem is related to chemical signaling. This research reinforces the importance of crop rotation and careful use of pesticides, especially in developing countries where the soil may naturally be nitrogen-poor.’