Sorting the good from the bad 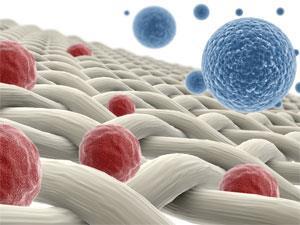 US scientists have found a way to separate cancerous cells from healthy cells by taking advantage of their adhesion properties. Separating cancer cells for analysis is a critical step for determining the recommended course of treatment for patients.

When Heather Powell and her team from The Ohio State University applied defined amounts of stress to cells deposited on nano-sized fibres, they found that the cancerous cells became unfixed in preference to non-cancerous ones. Although the weaker adhesion strength of cancer cells has been known for several decades, it is not until now that an inexpensive, high throughput method has been developed to exploit this property, allowing cancerous cells to be isolated from mixed cell populations.

‘As we have seen, a “one size fits all” approach to cancer treatment does not suit all patients; we were interested in developing technologies that would enable personalised cancer therapies,’ says Powell. To do this, the patient’s cancer cells need to be isolated from the tumour.

The team deposited the cells onto surfaces made from polymeric solutions that were electrospun (a process by which an electrical charge is used to draw polymeric fibres from a liquid) onto a glass slide or cover slip. The team then blasted the surface with plasma-treated CF4, modifying the polymeric surface to provide an ideal environment for the cells to adhere to and on which to observe the differences in cell behaviour. When a solution of cell culture medium flows past the surface, the vast majority of cancer cells are dislodged from the surface, leaving the healthy cells intact.

Kahp-Yang Suh, an expert in using microfluidic devices to separate cancer cells at Seoul National University, Korea, comments: ‘This type of physical separation scheme is always welcome as it is simple and does not involve pre-treatment steps that are needed for other well established labelling-assisted sorting methods (fluorescence- or magnetic-activated cell sorting). While the work has some potential, the separation efficiency and speed are still much lower than the above commercially available methods.’