The latest publication on jet processing of living cells has revealed a highly competitive research field.

The latest publication on jet processing of living cells1 has revealed a highly competitive research field.

Suwan Jayasinghe at University College London, UK, and colleagues report what they say is a unique and versatile jet-based technology for depositing living cells onto surfaces.

’The cells are intact and viable after jetting and they continue to divide normally,’ said Jayasinghe.

Living cells subjected to this so-called electrohydrodynamic jetting were syringed through a needle kept at a positive potential with respect to a ground electrode. This charged the medium containing the cells, so that it was immediately dispersed when it entered an external electric field. Discharging was observed and sparks flew between the needle and ground electrode at an electric field of 0.85 kVmm-1. 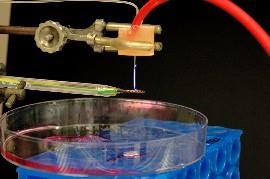 The technology is an improvement on current alternatives such as inkjet printing, says Jayasinghe, which he has been using as a bench mark on which to develop his new jetting technology. But inkjet expert Thomas Boland, associate professor of bioengineering at Clemson University, US, is not so sure.

Boland’s group uses off-the-shelf inkjet printers, with cells replacing ink in the cartridges.  Jayasinghe is correct that inkjet printers fall short when it comes to printing high viscosity or high loadings, said Boland, but the cell concentrations and viscosities reported by Jayasinghe are virtually identical to those used in inkjet printing.

What Boland fails to recognise, said  Jayasinghe, is a difference in cell mortality. Cells passing through an inkjet printer reportedly suffer about 10 per cent mortality, whereas ’our cell mortality is zero,’ he said.

Boland adds that while Jayasinghe’s technique relies on one nozzle, inkjets can use several thousand. ’Inkjets make it possible to deposit many different cell types next to each other, by using different colour cartridges,’ Boland told Chemistry World. A structure as large as a heart could be built at a rate of >400 000 cells per second, he said.

But that isn’t published, and neither is Jayasinghe’s rebuttal that 5-10 needles could be inserted into the one needle used in his system. Jayasinghe cites research in which a concentric needle configuration was used to produce encapsulations2.

’Combining this with our discovery of being able to jet living cells without harming them we would be able to form encapsulations having one cell type encapsulated by another cell type,’ he said.

Both teams envisage a range of biomedical applications, notably the fabrication of biological tissues - such as layers of skin - for repair.

’Since we have shown the proof of principle of cell printing several years ago,’ said Boland, ’we feel that it is critical to turn the attention to solve biomedical problems.’ Bea Perks