Spectrometry to the rescue! 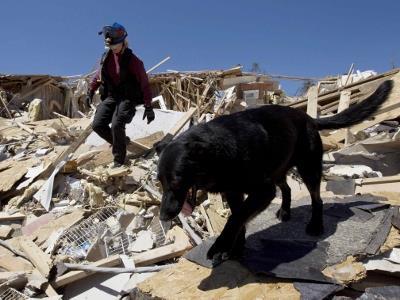 The next time a major earthquake strikes it could be an ion mobility spectrometer (IMS), not a sniffer dog, searching for people trapped in the rubble. New research has demonstrated that the instrument can detect a pattern of 12 chemicals that signal the presence of life. This could eventually lead to a handheld device to guide search and rescue teams.

Using chemistry to find people trapped in disaster sites makes sense, according to Wolfgang Vautz, of the Leibniz Institute for Analytical Chemistry, Germany, who helped develop the techique. Sniffer dogs are normally used for this purpose, but they need breaks and can get confused when there are lots of dead bodies around.

Vautz’s idea was to find survivors by detecting signature chemicals in human breath. To identify candidate molecules Vautz and his team sealed volunteer graduate students in a small office for six hours. The air from the room was sampled and put through a GC–IMS instrument – the latter is a type of spectrometer that separates ions according to their size and shape.

Carbon dioxide concentration was the control variable in Vautz’s experiments, as this could only originate from the volunteers’ respiration. At a real-life disaster site though, the situation could be complicated by other potential CO2 sources like fires. IMS analysis revealed that 12 simple organic chemicals – such as octanal and benzaldehyde – emanated from the graduates and increased in line with the CO­2.

By taking samples from inside a void and measuring their chosen chemicals the researchers could reliably discern whether a human was inside. Each sample took three minutes to analyse, and the test was very sensitive. Vautz says it even showed when one volunteer left briefly to use the bathroom.

Stephen Barton, a principal lecturer in analytical chemistry at Kingston University London, UK, says the concept is ‘interesting, not least because of the future possible advances, such as getting an indication of the health of the trapped person’.

Health monitoring is one of Vautz’s longer-term goals for the device. But the immediate challenge is deploying the technique in disaster zones, rather than a laboratory. Vautz says his team ‘struggled’ to carry the 25kg instrument around in a recent field test. But he is confident they can lighten it by choosing only the hardware necessary to analyse the 12 chemicals. ‘There are many examples of handheld IMS detectors already in use,’ he says, ‘one being for the detection of chemical warfare agents.'

Another obstacle is finding out how chemicals from fires and breached industrial faculties would interact with the analytes in real life. ‘Next we will need to find a partner from the search and rescue services to work with, so we can test this properly, in an ethical way,’ Vautz says.