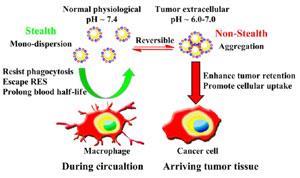 A team of Chinese scientists has created nanoparticles that respond to changes in pH, clumping together in acidic conditions. The group hope that their work will help to deliver drugs to tumours, which are more acidic than healthy tissues, with the advantage that their nanoparticles remain in cancerous cells longer than other pH sensitive nanoparticles.

The team created their pH sensitive gold nanoparticles by coating them with zwitterions – molecules that hold both a negative and a positive charge but are neutral overall – to produce nanostructures that can accumulate in tumours. These are highly desirable properties in the search for ‘magic bullet’ cancer drug delivery, in which a toxic payload is released in the tumour, without affecting healthy tissues.

Initially the scientists from Zhejiang University did in vitro tests on the nanoparticles, which are covered with 11-mercaptoundecanoic acid and (10-mercaptodecyl)trimethylammonium bromide, before moving on to in vivo testing. Other groups have created pH sensitive nanoparticles by attaching polyethylene glycol (PEG), so the retention of the new nanoparticles was compared against these PEGylated nanoparticles in mice with tumours. Tests showed that after 24 hours about twice as many zwitterion nanoparticles remained in the tumour, compared with PEGylated ones.

The group found that as the nanoparticles, which are around 16nm in diameter, went from a blood pH of 7.4 to a tumour with a pH of 6.5 they were removed from the body much more slowly. This neatly skewers a catch-22 of nanoparticle delivery: smaller nanoparticles, around 20nm in diameter, penetrate deep into tumours, but do not usually stay in the body more than 24 hours, while large nanoparticles, around 100nm, are more likely to stay in the tumour, but do not travel far from the blood vessels because of their size, so would be less effective at delivering a deadly payload.

The trick to getting the nanoparticles to accumulate is finding a zwitterion which has a corresponding pH range to that of the tumour and healthy tissues. At slightly alkaline pH, the negatively charged carboxylic acid groups keep the nanoparticles apart via electrostatic repulsion. But as the pH becomes more acidic in a tumour, more and more carboxylic groups become protonated. Thus the electrostatic repulsion between these groups becomes smaller and smaller until hydrogen bonding and van der Waals’ forces overcome it, causing the nanoparticles to aggregate.

According to author Jian Ji, the pH sensitivity of the nanoparticles also opens up many other possible avenues of research as ‘pH gradient is one of the most common characteristics … within tumours, other disease tissues and cell organelles’. He adds that pH sensitive nanoparticles have a ‘similar blood half-life to PEGylated nanoparticles but … much higher accumulation in tumours’.

Raphaël Lévy, a researcher at Liverpool University, UK, says it is impressive that the researchers achieved positive tests in vivo, rather than solely in vitro, which previous studies were limited to. However, Lévy expressed concern that ‘since the retention was based on aggregation, large doses would be needed for the mechanism to work in humans’.