The textbook mechanism of an SN2 reaction – reminiscent of an umbrella turning inside out in a gale – has long been thought to be an over simplification. Now an experiment has shown that even single molecule changes to the solvent microenvironment around a nucleophile can steer the reaction mechanism through vastly different pathways.

Roland Wester of Innsbruck University, Austria, used a crossed beam ion imaging spectrometer to study the substitution reaction of the hydroxyl anion with methyl iodide. He worked on three scenarios: solvent-free OH anions and the cluster species OH-(H2O) and OH-(H2O)2. These were accelerated head-on into a beam of CH3I molecules in helium. After a reactive collision between the two molecules an imaging detector recorded the angle and velocity at which the iodide leaving group was ejected. 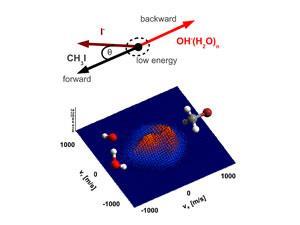 Although cross beam experiments have been around for about a decade, Wester says he has only recently developed technology that can image charged particles. That’s significant, because ‘many important reactions occur through reactive ions in solution’, he says.

The traditional ‘Walden inversion’ SN2 mechanism predicts that the iodide would be ejected from the transition state in a vector opposite to that of the nucleophile’s approach. However, Wester’s detectors produced maps showing starkly different iodide ejection vectors, depending on the number of water molecules clustered around the nucleophile.

With no solvent present, the two particles seemed to glance off each other like billiard balls, with the iodide continuing forward in almost a straight line. Conversely, with a single water molecule present the iodide was spat backwards; exactly as classical theory predicts.

On the other hand, when two water molecules were present they seemed to block the attacking nucleophile, forming a long-lived complex which had time to tumble before ejecting the iodide. The result was a map showing random scattering.

Wester also presented molecular models of the lowest energy conformations of the clusters to explain the results. He suggested specific hydrogen bond arrangements steer the nucleophile’s approach vectors differently in each case.

Marcello de Miranda, who studies reaction dynamics at the University of Leeds, UK, says the experiment is ‘very convincing’ because of the detailed measurements and the obvious differences observed for the three microsolvation environments. ‘My surprise is that they actually found some data that supports the textbook version,’ he says. ‘The SN2 mechanism which undergrads are told is a fairy tale, up there with Santa Claus and the Easter bunny.’