Adding sugar to antibiotics can boost their effectiveness and prevent recurrent and chronic infections, according to researchers in the US. A similar strategy could be used to treat tuberculosis (TB) in the developing world where persistent infections are a real problem, they say.

Bacterial persisters - dormant cells that can tolerate antibiotic treatments - account for less than one per cent of bacterial cells. But after a course of antibiotics they can multiply, causing the infection to return. 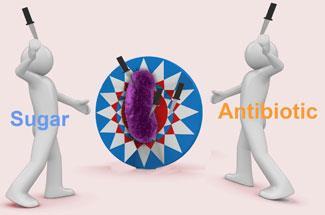 A sugar-antibiotic combo could target bacteria responsible for persistent infections

The team investigated the effect of a number of sugars combined with gentamicin, an aminoglycoside, on Staphylococcus aureus or Escherichia coli  by labelling the antibiotic with a red fluorescent dye. They then analysed the bacteria using fluorescence-activated cell sorting. The team found that the sugars led the bacteria to take up the antibiotic, killing a high proportion of them.

Collins explains that when the bacteria were treated with gentamicin and sugars, such as mannitol, fructose or glucose, the bacterial persisters did not start growing again, but still died. The researchers theorise that, instead of promoting growth, the sugars alter the electrochemical gradient in the bacteria, allowing the antibiotic in.

’This strategy could find application not only in the treatment of urinary tract infections, but a variety of biofilm-associated infections or diseases. It is therefore of great significance,’ says Sylvie Garneau-Tsodikova, an aminoglycosides expert at the University of Michigan, US. ’It will be interesting to see how new, more potent and less toxic aminoglycosides that were just discovered, or that will be developed in the future, will fair in killing bacterial persisters using this methodology,’ she adds.

Collins believes the next step is to explore a similar strategy to treat TB. ’The method is simple and inexpensive and should also be amenable, as we take it further into clinical trials, for production in the developing world,’ he says. ’You can have your existing antibiotics and just add sugars, that are cheap, to boost the effectiveness of the treatment.’