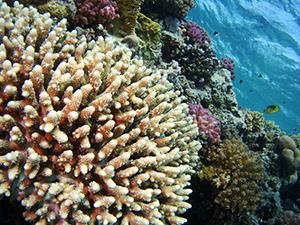 Researchers in Australia say that the destruction of coral reefs could pose a ‘double jeopardy’ for the environment, as a new study has found that corals produce a sulfur molecule linked to the global climate cycle. The findings suggest that shrinking reefs not only threaten biodiversity, but may also speed up climate change by curtailing the formation of heat-reflecting clouds.

Dimethylsulfoniopropionate (DMSP) is produced by algae and some coastal plants, but was not thought to be produced by animals. DMSP is broken down by bacteria into dimethyl sulfide, a strong smelling, volatile gas that is released into the atmosphere where it helps to seed clouds. Increasingly, studies which forecast future climates are considering the effects of these climate-active sulfur compounds.

Coral reefs were already known to produce DMSP, but scientists have always assumed it came from the symbiotic algae that live within the coral’s tissues. Jean-Baptiste Raina at James Cook University first suspected this may not always be the case while measuring DMSP in heat stressed corals.

‘When adult corals are subjected to thermal stress, they get rid of their DMSP-producing algae,’ says Raina. ‘We expected the DMSP concentrations in these corals would be lower than healthy corals, but what we measured was completely the opposite.’ In fact, the team recorded a two-fold increase in DMSP in heat stressed corals that were almost completely devoid of algae. They also detected DMSP in the larvae and juveniles of Acropora corals, which have not yet acquired their algae.

The team then searched the genomes of different coral species and found two genes that were closely related to algal genes involved in the metabolic pathway that produces DMSP. They suggest the corals produce DMSP because its breakdown products, including dimethyl sulfide, attract other organisms to the reef and have antioxidant properties that protect the corals under heat or oxidative stress.

The findings show coral reefs are important not just for marine biodiversity, but for climate regulation, according to Raina. Large reefs are a steady source of DMSP and coral larvae, which produce about half as much as adults, may represent a significant chunk of that output. ‘This finding is important for those studying the impact of sulfur-cycling on climate,’ he points out. ‘It adds an additional value to coral reef ecosystems and further highlights the need to protect them.’

Stephen Archer, a biogeochemist at the Bigelow Laboratory for Ocean Sciences, US, agrees the discovery of DMSP production in an animal is exciting. But he adds that the effects of coral-produced DMSP are likely to be regional, contributing to cloud formation around the biggest reefs but having only a marginal effect on the global climate. ‘I suspect the majority of DMSP still comes from phytoplankton in the open ocean,’ he says.