A chemical substance first synthesized in 1995 in a university lab in the US for purely experimental purposes is now being used by young people around the world to legally achieve a marijuana-like high and is causing alarm among health officials in Europe.

The synthetic substance, JWH-018, a cannabinoid receptor agonist from the aminoalkylindole family, has been found in herbal mixtures sold legally under various ’spice’ names, such as Spice Gold and Spice Yucatan Fire. The mixture is sold as incense, but is smoked to get high. 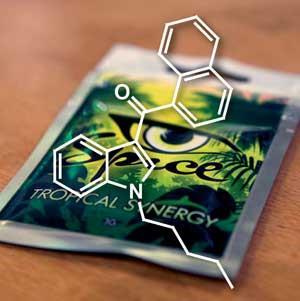 JWH-018, recently discovered to be an ingredient of Spice, is causing alarm amongst health officials

Germany’s Drug Commissioner Sabine B?tzing has vowed to make the sale of Spice mixtures illegal in Germany by the end of January, by modifying the Controlled Substances Act. She says Spice can have negative side effects and be addictive. Switzerland, Austria and the Netherlands have already banned Spice.

As Spice grew in popularity over the past year, several laboratories tried unsuccessfully to deduce what ingredient was responsible for the high, with one expert suggesting it was simply a placebo effect. But in December, THC Pharm, a Frankfurt, Germany-based company that makes medicines from cannabis, was able to detect JWH-018 in several packets of Spice.

Christian Steup, a medical doctor and pharmacist in charge of quality control at THC Pharm who supervised the analysis, told Chemistry World that he was able to detect JWH-018 while bigger labs failed because he had synthesised the substance about two years ago and all information was still on the company computer.

The substance, which he said can be bought from producers in China, is added to the Spice herbal mixture. Quantities of JWH-018 in Spice packets tested varied widely, from as little as 0.2 per cent of the total mixture to as much as 3 per cent, Steup says.

JWH-018 is four to five times more potent than tetrahydrocannabinol, more commonly known as THC, which is the main psychoactive substance in cannabis, Steup says, adding that JWH-018 ’is fascinating because the chemical structure does not look at all like THC, but it produces the same effects.’

The chemist who designed (and lent his initials to) JWH-18, John W Huffman, an organic chemist at Clemson University in South Carolina, told Chemistry World that his goal had been to make a simple compound to study structure-receptor relationships. The compound interacts with both cannabis receptors. The first batch was actually made by an undergraduate student working under a post-doc. ’It is really easy to make,’ Huffman said.

JWH-018 has not been licensed anywhere in the world for medical applications and little is known about the effect on humans, as not even pre-clinical studies have been to determine potential toxicity. Steup says he is inclined to believe it is not toxic, and that he would be more concerned about any lingering impurities from the production process.

Huffman says, ’I don’t have a clue.’ But noting the similar highs produced by THC and JWH-018, he says: ’You cannot overdose on THC. You can forget your name or where you are, but too much THC will not kill you.’

Asked whether he sees any potential medical applications for JWH-018, he said: ’No. It’s like LSD, the only thing it is good for is getting you high.’