US scientists say gold nanoparticle based therapies could be used to help boost levels of good cholesterol in our bodies. Chad Mirkin and Shad Thaxton and their team at Northwestern University, Illinois, have created a synthetic mimic of HDL, the particle which carries cholesterol away from overloaded cells. They hope that their approach could eventually be developed into a therapeutic medicine.

HDL (high density lipoprotein) is a complex particle which transports excess cholesterol to the liver for disposal or reuse. High levels of HDL-bound cholesterol, the so-called ’good cholesterol’, are thought to reduce the risk of heart disease and prevent the accumulation of deposits in arteries. But while therapies such as statins are available to reduce levels of bad cholesterol (low density lipoprotein, LDL), those available to boost HDL, such as niacin supplements, are less effective, and carry unwanted side effects. 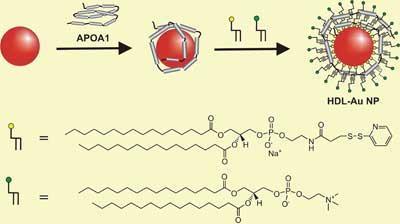 To redress the balance, the team at Northwestern has attempted to make a simple synthetic form of HDL, which they say could be taken to supplement HDL levels in our bodies. Starting with a gold nanoparticle as a template, the team added apolipoprotein A-I (APOA1), the major protein component of HDL, followed by two forms of phospholipids - a disulphide to bind to the gold, plus phosphatidylcholine, which is found naturally in HDL. Their resulting structure mimics the size and basic surface structure of HDL.

’People have tried to make these complexes without inorganic structures but it’s very difficult to control the size of the particles,’ Mirkin told Chemistry World. By choosing the size of the gold particle the team have been able to regulate the size of their resulting HDL mimic. Gold is a biocompatible material and its well understood nano surface chemistry should allow these types of structures to be built routinely, Mirkin adds.

Tests showed that the HDL mimic bound irreversibly to cholesterol in vitro. ’This seems to be the first example for which the binding constant for cholesterol has been measured for any kind of HDL, let alone synthetic HDL,’ says Mirkin. ’Being able to get key parameters like binding constants are a critical step towards creating a rational way of developing a drug lead into an actual therapeutic.’ 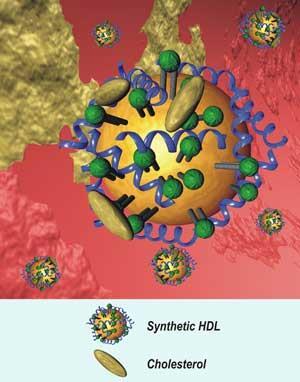 Stanley Hazen, director of cardiovascular diagnostics at the Cleveland Clinic in Ohio, agrees that HDL targeted therapy is an important area of research but says that the team’s particle is as yet an unproven technology.

’For any kind of synthetic HDL, it really is critical to show that it has biological function. It’s unclear that it has any sort of biological activity either in a tissue culture or in vivo. Until those are done it’s hard to judge whether this represents any kind of significant advance,’ Hazen says.

Naturally occurring HDL is a complex structure made of multiple proteins, which interacts not only with cholesterol but also with cell surface proteins and with enzymes found in the blood. Whether the team’s molecule will be able to mimic all these activities is as yet unknown. And according to Hazen, over the past year, techniques for making reconstituted HDL using naturally occurring materials have greatly improved.

However the team are hopeful about the prospects for their HDL mimic and plan to test its activity in animal models. ’We haven’t claimed to create a therapeutic - we’ve created a therapeutic lead,’ says Mirkin.