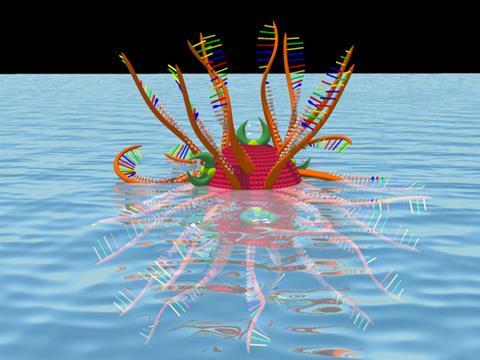 Researchers at the University of Florida, US, have discovered that an artificial nanoparticle complex, known as a nanozyme, can help to treat viral infections by ‘shutting off’ their genetic material.1 This novel approach is set to play a valuable role in functional genomics and could improve our ability to combat protein certain diseases such as viral infections and cancers.

The team has shown that a specifically designed nanozyme for the treatment of the hepatitis C virus (HCV) can actively cleave HCV RNA in a sequence specific manner, mimicking the function of cellular RNA-induced silencing complexes (RISC) in cultured cells and in tests on mice. It is also remarkably effective – the team observed a more than 99% decrease in HCV RNA levels in mice treated with the nanozyme.

Like DNA, RNA is essential to life. Its long sequences of nucleotides allow RNA to encode genetic information, to control gene expression and to communicate responses to cellular signals. Significantly, many viruses – such as HCV – use RNA as their primary genetic material. RISCs are multiprotein constructions that use a strand of RNA as a template for recognising and cleaving a target RNA, effectively turning off the gene.

Andrew Fire and Craig Mello shared the Nobel Prize in Physiology or Medicine in 2006 for their pioneering work on RNA interference, in which they suggested that there could be a catalytic or amplification component in the interference process.2 Since this discovery, the use of RNA interference to control gene expression has emerged as a fundamental experimental tool for studying gene function and biological pathways in living cells and living organisms.

This nanoparticle-based approach will offer significant advantages over existing approaches to RNA silencing. ‘Our nanozyme is more stable than the therapeutic agents used in other approaches and the nanozyme can easily enter the cells and engage the target,’ says Y Charles Cao, who led the research team. ‘In addition, the cleavage of targeted RNA is performed by the attached ribonuclease, which is independent of the intracellular microenvironment.’

The team’s results show that the nanozyme approach could also be used for other conditions that require the silencing of RNA. ‘Our nanozyme-based RNA silencing approach complements existing  RNA interference methods and has the potential to become a general experimental tool for functional genomics and an effective therapeutic tool for combating diseases such as viral infections, cancers and other protein expression-related diseases,’ Cao tells Chemistry World.