Carbon dioxide can be safely stored for millennia in deep, underground reservoirs, according to a new study by a team of international researchers. The results of the study, which looks at how CO2 is stored in natural gas fields, suggest that most dissolves in water. Trapping and burying large quantities of the greenhouse gas in this way could, therefore, be a viable long-term option for combating climate change.

’What we tried to do with this work was to look at the longer timescale and find out where the CO2 ends up being stored, and our main conclusion is that most of it goes into the groundwater,’ says Stuart Gilfillan at the University of Edinburgh, who led the research. ’Some of these fields have stored CO2 for up to 40 million years - we’re talking about geological storage times.’ 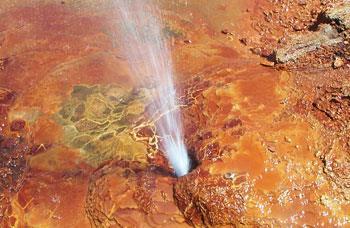 Chaffin Ranch geyser, Utah, during an eruption of CO2 and water. The geyser began erupting when a water-well was drilled into a CO2 saturated aquifer in the 1930s

Previous research in CO?2 storage has been based on theoretical models or injecting small amounts of the gas into test sites. The new study, however, focuses on CO?2 originating from the Earth’s mantle in nine natural reservoirs located around the world - most at depths of over 700 metres. There was no evidence of groundwater leakage at any of the sites, indicating that the gas was securely contained. ’The next stage is actually putting in CO2, measuring what happens to it in the shorter term and seeing whether it validates the models,’ says Gilfillan.

The researchers measured the ratio of CO2  to 3He and other Noble gas isotopes in samples from each of the gas fields. CO2/3He was reduced in the samples compared to standard levels in the mantle, showing that CO2  levels must have declined over time. By analysing the fractionation of carbon isotopes in samples, they estimated the percentage of carbon dioxide lost to water in rock pores - or, alternatively, mineral precipitation as carbonates - at each of the sites. Dissolution in water accounted for up to 90 per cent of the carbon dioxide lost.

Cor Hofstee, a CO2 storage expert at the Dutch research institute TNO, says he is surprised by the total lack of chemical activity in the fields. Based on TNO’s own analyses, however, he agrees that CO?2 loss by mineralisation is a minor process.

Bernhard Mayer, a geochemist at the University of Calgary in Alberta, says the team’s method of combining Noble gas and carbon isotope data is innovative. But, he warns, the study doesn’t prove the overall safety of deep CO??2 storage. ’It is correct that once CO2 is converted into soluble form, ionic form, or mineral form, the storage security increases considerably,’ he says. ’But that doesn’t mean that CO2 could not be lost in the initial phase of CO2 storage projects.