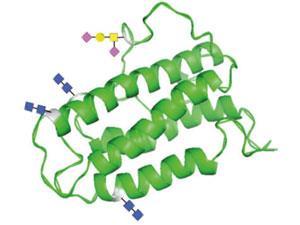 US researchers have produced a fully synthetic version of erythropoietin (EPO), the glycoprotein responsible for regulating blood cell production. The synthetic version includes truncated forms of all of the sugars that would naturally decorate EPO, attached at the correct positions through the correct chemical linkages. The work shows that it is now possible to synthesise individual versions of relatively large glycoproteins with well-defined carbohydrates attached, which should provide a platform to study the role of these sugars in determining the stability and function of the proteins.

For 10 years, Sam Danishefsky and his group at the Sloan-Kettering Institute for Cancer Research in New York dreamed about the possibility of a total synthesis of EPO. Bioengineered versions – most notably Amgen’s Epogen (epoietin alfa) – have been on the market since 1989 (and been exploited by unscrupulous athletes for their blood-doping properties for almost as long). However, biological EPO is rarely produced as a single glycoform – subtle tweaks to the culture and purification conditions can have drastic effects on the patterns of sugars attached to the protein backbone and the distribution of different glycoforms within the final product.

So Danishefsky and his group set about trying to make EPO from scratch. The team quickly realised that even state of the art solid phase protein synthesis wasn’t up to the job of coupling together EPO’s 166 amino acid sequence. Instead, they planned to make four shorter peptide fragments, with sugars attached, and link them up. But, as Danishefsky points out, the methods then available for coupling the peptide fragments were also too limited in their scope to reach the goal.

Building on work from several other groups to expand the repertoire of peptide ligation reactions, not only to expand the range of amino acids that could be present at the coupling site, but also to improve their compatibility with glycosylated peptides, the team eventually had all the pieces in place to assemble their synthetic EPO. That said, they still needed to employ a few tricks and tweaks to keep the chemistry on the right track.

Derek Macmillan from University College London, UK, who developed some of the ligation chemistry used in the synthesis, and also works on erythropoietin, praises the team’s synthetic efforts, but notes that without the full complement of sugars, it still falls considerably short of anything that would be produced biologically, meaning that it would be unlikely to have any significant activity in vivo.

‘More important are the methods that have been developed along the way,’ Macmillan adds, ‘probably none more so than the metal free dethiylation reaction. This advance allowed researchers to completely rethink the strategy by which peptide pieces could be assembled into proteins.’

While total synthesis is unlikely to compete with biotechnological methods of producing EPO, from the point of view of studying its activity and developing better drugs, having access to well-defined single glycoforms could be a very useful tool. ‘You want EPO to stay in a patient for about three hours or so,’ says Pauline Rudd from the National Institute for Bioprocessing Research and Training in Dublin, Ireland. ‘Without the right sugars it’s gone in three minutes.’ Rudd points out that the heterogeneity of glycosylation patterns in natural EPO make sense for a protein that might perform several subtly different functions, or as protection against attack by pathogens. ‘But in terms of a drug where you really only want one function, having a single glycoform could be an advantage,’ she adds. ‘The downside is that, if it’s all the same and it happens to bind to some other receptor or protein, then you lose all your product in some unwanted interaction which might give you side effects, so every molecule would have to be reviewed on its own merit.’