Scientists in the US have found a new drug target that could be important in treating acute myeloid leukaemia (AML). The team, led by Christopher Vakoc and Scott Lowe at the Cold Spring Harbor Laboratory in New York, showed that blocking a protein called Brd4 inhibits the proliferation of human AML cells. This protein is involved in sustaining the expression of Myc, a key pathway protein involved in many cancers which has, thus far, proved undruggable. 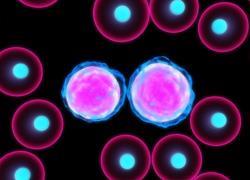 Changes to a cell’s epigenome can lead to leukaemia

As Vakoc explains, AML can be caused by changes not only in the genome, but also the epigenome. The epigenome is the collection of reversible chemical modifications, such as methylation or acetylation, to the DNA or the proteins that are associated with it in the cell. These are important in the regulation of gene function.

The AML results from a dysfunction in the cellular machines that control chromatin, Vakoc explains. Chromatin is the combination of DNA and proteins that are packed together in the cell nucleus, and their hypothesis was that as chromatin changes can cause this cancer, chromatin changes might also be a way to treat it.

They used an RNAi screen to hunt for small RNAs that interfere with protein expression in AML. ’We systematically knocked down every chromatin regulator, and looked for severe inhibition of leukaemia growth that was selective towards malignant cells versus normal cells,’ he says. ’The top hit was the gene Brd4, which encodes a chromatin regulator known as a reader.’

Initially, he says, they weren’t sure if it would be a good drug target - unlike most targets it’s not an enzyme, but an adaptor that engages in protein-protein interactions. ’By an amazing coincidence, at the same time James Bradner at the Dana Farber Cancer Institute in Boston published some small molecule inhibitors with high potency against Brd4 they’d developed for squamous cell carcinoma,’ he says. ’I called him up, and the next day we had a gram of this drug, JQ1, in our lab. We saw really robust effects in the very aggressive leukaemia mouse model we’ve been using.’

According to Gerard Evan, professor of biochemistry at the University of Cambridge, no-one yet knows how to target the crucial Myc gene itself, and targeting surrogates like this could work. ’It looks like Brd4 is required to switch Myc on in this particular type of cancer, and the study seems to indicate that at least some of JQ1’s activity is by inhibiting Myc,’ he says. ’It fits well with the emerging theory that Myc is required for cancer survival.’

A spin-out company, Tensha Therapeutics, has already been set up to take JQ1 into the clinic, including trials in leukaemia. The next step for Vakoc’s group, he says, is to understand why leukaemia cells are so dependent on this gene, when normal cells are not.