They said it couldn’t be done. Ok, they still do, really. But the technology that makes invisibility shields a theoretical possibility took a major step forward with reports of a material that bends visible light away from itself.1

This latest development from Henri Lezec and co-workers at California Institute of Technology, Pasadena, US, could lead to a ’superlens’ capable of producing optical images with detail to rival electron microscopes.

When light passes from one substance into another it is refracted or bent by an angle determined by the substance’s refractive index. For all naturally occurring substances the refractive index is positive, meaning the light is bent towards an imaginary line perpendicular to the surface. But composite ’metamaterials’ have a negative refractive index. Light that passes through them is bent back in the opposite direction. The effect is caused by the metamaterials’ precisely engineered structures, not their chemical composition.

The field is advancing at a dizzying pace. ’It’s a bit like the space race’ said Igor Smolyaninov of the University of Maryland, US. In late 2006 a metamaterial made of concentric rings precisely patterned with copper was hailed as an invisibility shield as negative refraction allowed it to channel microwave radiation around itself like a river flowing round a stone.2 Recent months have seen reports of these structural features being scaled down enough to negatively refract red visible light,3 but materials that could do the same to even shorter visible wavelengths had proved elusive.

Now Lezec and co-workers have used electromagnetic waves called surface plasmons, which are generated when photons hit electrons in a metal. A layer of insulating silicon nitride is sandwiched between two sheets of silver. Light entering through a slit in the silver produces plasmons which are guided along the metal-insulator surface until they reach a gold prism embedded in the silicon nitride. As the plasmon wave passes through the 50 nanometre-wide channel between the prism and the silver sheet it is heavily perturbed, and is negatively refracted on passing back into the silcon nitride. Blue-green light emanated from the device at a tell-tale angle. 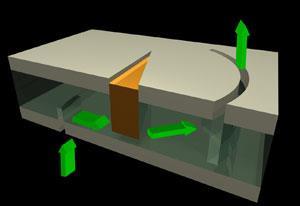 Negative refraction of green light: Light entering through a slit in the silver produces plasmons which are guided along the metal-insulator surface until they reach a gold prism embedded in the silicon nitride. Light emanates from the device at a tell-ta

Ready for your close up?

Invisibility aside, metamaterials’ unusual optical behaviour has sparked interest for their potential as lenses. The resolution of microscope images is limited by the wavelength of the light used to illuminate the sample. Features smaller than this scatter the light into ’near-field’ evanescent waves that normally decay before they reach an observer. A metamaterial ’superlens’ can capture and amplify these near-field waves, projecting an image of the fine detail that can be observed using a normal microscope. Such resolution from optical measurements could make real-time imaging of biomolecules possible, for example, doing away with the slow surface scanning used in conventional techniques such as electron microscopy. Two papers are presented in the same issue of Science that use complementary approaches to do exactly this.

Smolyaninov’s group used a series of concentric polymer rings on a gold surface to amplify an image generated by surface plasmons.4 Meanwhile Xiang Zhang and colleagues at the University of California at Berkeley captured the near-field waves and propagated them through a bulk metamaterial.5 Zhang used concentric cylinders to provide the optical trickery, and the incident light was just outside the visible, in the near UV. Both lenses gave resolutions of a few tens of nanometres.

So does the discovery of a visible-light metamaterial herald a magnifying glass for molecules? Lezec is hoping to show this can be done, but to be truly useful the technique needs to work at all angles of incident light. ’We see potential for this as a promising building block’ for realising 3D visible light superlenses, he told Chemistry World. Liu said his group is refining the structure to allow for visible illumination, but pointed out that other wavelengths such as UV may be just as useful for biomolecular imaging.

The final word goes to Lezec, who has encouraging news for sci-fi fans: ’A cloaking device is pretty forseeable in two dimensions.’ Making a 3D version would be a matter of tailoring the device geometry and the composition of the prism, he said.