The mystery of the disappearing crystals

A particular crystal form of the female steroid hormone progesterone can no longer be made. UK chemists have analysed a fifty year old sample to find out why and say that it’s down to impurities. This takes researchers a step closer to understanding why certain pharmaceutical drugs lose their therapeutic effect.

Robert Lancaster from University College London, in collaboration with Pharmorphix, a company in Cambridge that carries out research for the pharmaceutical industry, analysed two crystal forms of progesterone, which has five known crystal forms, or polymorphs.

They discovered that impurities in the old sample - in this case, other steroids - that were added during the synthesis to induce crystal growth could account for the stability of form 2 over form 1. The researchers found 11 impurities in form 2 and only three in form 1. Unfortunately, they were unable to identify the exact structures of the impurities, making it practically impossible to reproduce the conditions to make the crystals again. 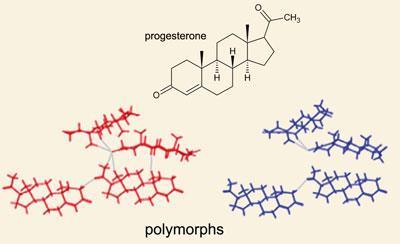 Studying polymorphism is important because many drugs receive regulatory approval for only a particular crystal form of a compound. But polymorphs can disappear - where it becomes difficult to continue growing a particular crystal form. New, more stable, forms are grown. This happened to a HIV drug called ritonavir. Over time, a second crystal form emerged, which was less soluble and so less effective as a drug. Ritonavir had to be pulled from the market while researchers worked to solve the problem.

To analyse the structure of the progesterone crystal, the group carried out a unique experiment in which they combined crystal structure prediction with other experimental methods, such as slow and rapid evaporative crystallisation. The result allows the identification of the most stable polymorph, which could then be used to develop a new pharmaceutical drug.

’Pharmaceutical companies adopt a more rigorous approach to screening for polymorphs,’ explains Lancaster. ’They try to find and develop the most stable polymorph but aggressive timescales associated with the development process may mean that nasty surprises can occur.’ Lancaster says his work aims to remove these surprises.

’Future work will reveal more to explain what’s going on,’ predicts Nick Blagden, a polymorphism expert from the University of Bradford, UK, ’and is linked to fundamental studies into nucleation and crystal growth, which are linked to crystal engineering.’

Lancaster is now looking at other polymorphic systems and carrying out new automated analytical and crystallisation methods to discover the most stable polymorphs.