Infrared spectroscopy could be used to look for signs of endometriosis

A potential non-invasive method to detect endometriosis by acquiring a spectral signature of the uterus has been developed by scientists from the UK.

Francis Martin from Lancaster University and colleagues used infrared spectroscopy together with computational analysis to analyse the difference between uterine tissue affected by endometriosis and normal tissue in the uterus.

’Endometriosis [the growth of endometrial tissue outside the uterus] affects about 10 per cent of young women and can be associated with severe abdominal pain and could result in cancer,’ says Martin. ’Currently, there is no non-invasive means of diagnosis; it is done by laparoscopic surgery,’ Martin adds. 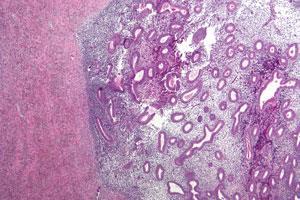 An image showing endometriosis of the ovary

Martin and his team analysed uterine samples from hysterectomy patients. They compared endometrial tissue growing outside the uterus with the endometrial tissue within the uterus using infrared spectroscopy to give a biochemical-cell fingerprint for each sample. They also compared the samples to tissue from endometriosis-free women. ’These IR spectra can then be processed using computational algorithms that allow one to quickly visualise the data to determine which spectra are similar or dissimilar to each other. Consequently, one can determine the normal tissue IR spectra and those outside this range may be determined as atypical,’ explains Martin.

The team found that endometriotic tissue possesses a unique spectral signature and, more importantly, that the uterus of women with endometriosis express a signature distinct from that of the non-endometriotic uterus.

Martin hopes that the technique can be used on samples that can be obtained directly from patients in a non-invasive way. ’Screening cytology from the cervix is already well established. It is also possible to obtain cytology in a similar fashion from the uterus, or even small biopsies,’ he says. He adds that cases of endometrial cancer are on the rise and this approach could be used as a cancer screening tool.

’Over the last few years, a great amount of work has been carried out to study cancer with Fourier Transform infrared (FTIR) spectroscopy. However, it is also important to apply this technique to the study of non-malignant diseases such as in this work,’ says Josep Sul?-Suso, an expert in oncology from Keele University. ’The combination of FTIR spectroscopy with available diagnostic procedures for endometriosis should help in understanding the causes of this disease, leading to the development of effective therapies,’ he adds.