A material that can be cooled by an electric field could replace greenhouse gases as a refrigerant in household and industrial fridges, scientists in the UK claim. 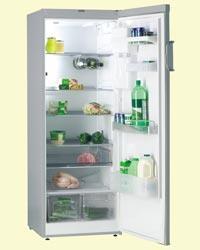 The researchers applied a voltage across thin films of zirconium-rich lead oxides, generating a so-called giant electrocaloric (EC) effect that cooled the film by 12 ?C.

The work, by Alex Mischenko, a PhD student in the department of materials science at the University of Cambridge, and colleagues, marks a significant improvement on previous studies, where the biggest EC effect was only 2.5 ?C. The material could one day be used in domestic and industrial refrigerators, reducing the need for greenhouse gases as coolants, said Mischenko.

EC effects were intensively studied in the 1960s and 1970s in bulk materials, but the research was eventually abandoned because it didn’t produce significant temperature changes. ’The EC’s small size meant people weren’t interested in it,’ Mischenko told Chemistry World. ’People never tried to measure the EC effect in thin films,’ he added.

Tim Jackson, from the Birmingham University, UK, emerging device technology group said if Mischenko’s materials could be integrated into computer chips, they would be useful for cooling components inside computers. ’By cooling at the point that the heat is generated, you can run the computer faster,’ he said.

Creating a large electric field by applying a small voltage across a thin film is not new, and other phenomena arising from that are well studied. Mischenko’s good idea was to bring several things together to produce the EC effect, Jackson said.

Jackson does not agree that this material will ever produce enough energy to replace kitchen fridge coolants - which work by turning liquids into gas. But if another, similar approach is incorporated, in particular ferroelectric memory technology, Jackson says better cooling could be achieved.

Another expert in the field pointed out that Mischenko’s result is not the same as a direct demonstration of the electrocaloric effect, because they have not measured a temperature change in response to a change in applied voltage.

A fridge manufacturer and a large IT company have both expressed interest in Mischenko’s work, for use in industrial and household refrigerators, and to cool computer components. Mischenko hopes his findings will prompt interest from other researchers working in the area. He plans to optimise the system, replacing lead with less-toxic bismuth, which he said will make it more commercially applicable.