Scientists in Japan have developed a portable influenza testing kit with better accuracy than current methods, which can give a result in 30 minutes.

Scientists from the Tokyo Medical and Dental University and Sony Corporation  made a nucleic acid amplification testing (NAT) device that not only gives information on the sample’s genetic make up to identify the flu pathogen type, but is also more than  90 per cent accurate. The device works by detecting the genes of the influenza virus pathogen - an organism that causes the disease - which gives information about the virus subtype and drug resistance.

Current rapid diagnostic kits to detect the flu virus suffer from low accuracy (40-69 per cent) and don’t provide genetic information about the sample. One NAT in use to test clinical specimens is real time reverse transcription polymerase chain reaction, which involves amplifying, detecting and quantifying DNA sequences. It does give genetic information, but it consists of a complex procedure and takes 3-4 hours to produce results.

Sony’s detection system comprises: a laptop to control the system; a device for heating samples and detecting fluorescence; and disposable testing chips. The chips contain reaction wells made of polydimethylsiloxane sandwiched between two glass sheets in a vacuum chamber. Samples are injected into the wells through a port by a disposable injector, eliminating the need for pumps and tubing. 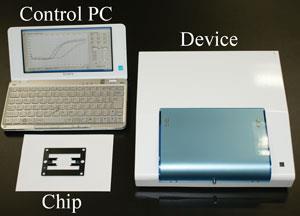 The detection system comprises: a laptop to control the system; a device for heating samples and detecting fluorescence; and disposable testing chips

Loop-mediated isothermal amplification (LAMP) - in which a target sequence is amplified at a constant temperature - is then used to carry out nucleic acid amplification. The samples don’t get contaminated because there isn’t an outlet port and there’s no need to purify samples, which is time-consuming, so results can be seen in 30 minutes.

The team tested the system on swab samples from the throats of people with respiratory symptoms and found that it was comparable to results obtained from the real time reverse transcription polymerase chain reaction.

’As a point of care system, the test must be sensitive, rapid and cheap,’ says John McCauley, director of the World Health Organisation Collaborating Centre
for Reference and Research on Influenza. ’30 minutes would not be great when patients’ visits to a GP are less than 15 minutes, but in other locations such as schools, old peoples’ homes and the military a point of care test might be useful and the cost implications not so great.’

’For our technology to become widely used in clinics and developing countries,’ says Tomoteru Abe, who worked on the research, ’we’d need to develop a more cost effective device, reagents and diagnosis chips.’

In the future, Abe hopes that the device will be used to test for other infectious diseases such as tuberculosis and HIV but also to run non-clinical tests, such as food tests.